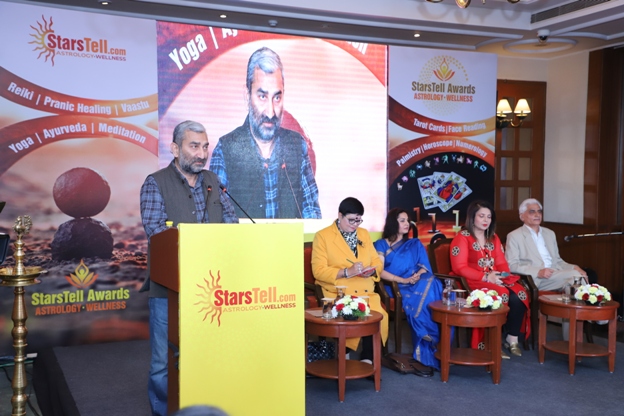 
New Delhi, 16th March 2019: To discuss and predict the upcoming Lok Sabha 2019 elections and its impact on the Future of India, StarsTell.com today organized its first and one of its kind annual flagship summit, that was inaugurated by a Shri S. Milkha Singh, wellness icon and a Padma Sri awardee at StarsTell Awards 2019 held at India Habitat Centre in New Delhi today.

A serious political analysis using numerology, tarot and planetary movements was conducted by the panelists. The unanimous conclusion was that that PM Modi was a winner. His horoscope is very magnetic and powerful and his personality has oval aura, which symbolizes his organized, calculated and result oriented approach to politics. Modi currently has dark blue aura which the aura expert predicted would transform into purple, destined to propel his rise. Rahul Gandhi’s number 19 is lucky according to numerology, and he has a rectangular orange aura which should ideally become pink in order for him to attain political success. It was suggested that, Modi government will be cobbling together a coalition government.

Delivering the keynote address Mr. Vivek Dhir, Founder & CEO, StarsTell.com said, “In India vedic astrology has deep roots and with the changing era, the innovation of technology has the power to open up new avenues. It is our team’s effort to showcase a perspective on the upcoming 2019 Lok Sabha elections and its glimpse and its impact on the future. It is also unique platform to felicitate practitioners of predictive sciences and wellness therapies. This innovative combination of technology and astrology opens a new avenue for the ancient vedic sciences that brings together the new age astrologers, tarot card readers, numerologists, aura readers and holistic healing practitioners to connect with their users.”

The session was then swayed away with the melodious music for healing played by the world fastest pianist Dr. Aman Bathla, along with a live canvas painting done by artist Shri Narendra Pal Singh. The StarsTell Awards 2019 was concluded with the recognition to professionals in various streams of Wellness and Astrology, StarsTell.com planned a voting based award presentation which led the attendees to share their growth stories and introduced their upcoming initiatives. The event was attended by over 200 practitioners and distinguished guests.

StarsTell.com was founded in 2005 by an accomplished business leader and founder of World Phone India Mr. Vivek Dhir, StarsTell.com is a premium e-commerce portal for online astrology and predictive sciences consultations and a provider of live astrology services for telecom operators in India. In 2019, the company added healing and wellness to its predictive sciences portfolio, and launched a digital TV channel too, transforming into one stop destination for holistic wellness solutions.

Christian Homeschool Online
Go to Assignmentgeek.com and get your homework done.