Hindu temple with capacity of 7,800 people opens in Massachusetts 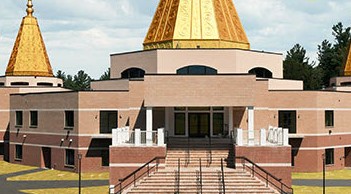 
A magnificent two-story Hindu temple reportedly covering 40,000 square feet on a 28-acres plot, which claims to accommodate 7,800 devotees, is opening in Groton (Massachusetts) with 12-days of ceremonies ending on October 20.

New England Shirdi Sai Temple is designed in traditional style following Vastu Shastra and whose main worship hall can hold 500 congregants, will reportedly cater to about 5,000 families of the area. Ground floor of this temple, whose groundbreaking was held in 2015 and which contains three golden spires, will be used for community activities/functions. There are plans of fountain pools in the landscaping.

It is operated by non-profit New England Shirdi Sai Parivaar formed in 2006; whose vision includes “spread the message of love, kindness, unity and make a meaningful contribution to the welfare of the mankind” and beliefs include “Faith and Patience”.

Rajan Zed, who is President of Universal Society of Hinduism, further said that it was important to pass on Hindu spirituality, concepts and traditions to coming generations amidst so many distractions in the consumerist society and hoped that this temple would help in this direction.

It offers various prayer services inside and outside the temple, including free Car Pooja in the temple premises. Its charitable/philanthropy activities have reportedly included helping Haiti earthquake victims and India flood victims, food distribution to Lowell homeless shelter and clothes distribution to the needy, volunteering in Stoneham Zoo landscaping project, etc. Mahender Singh is the President; while Sateesh Sharma and Nagendra Sastry are temple priests. It is seeking donations.