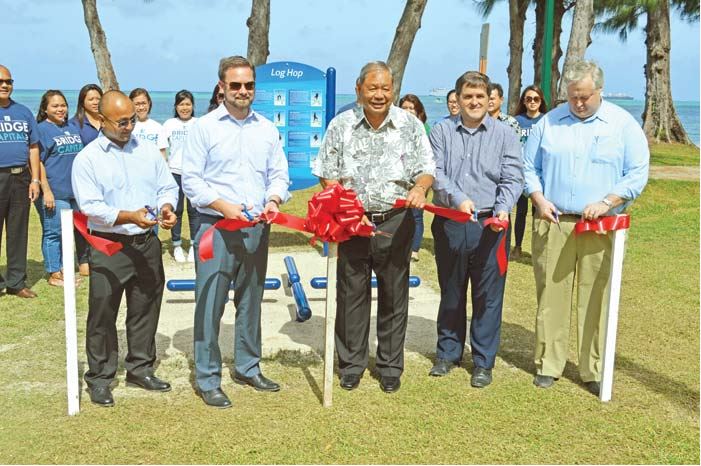 
Six new fitness stations have been inaugurated at Beach Road Pathway, officially called the Gov. Froilan C. Tenorio Beach Road Pathway, in Saipan, Commonwealth of the Northern Marianas Islands. The project is another generous donation by Bridge Capital, LLC to the Saipan community, and was made in coordination with the office of the Saipan Mayor, Hon. David Apatang.

A ribbon cutting ceremony was held on February 27, 2017, and attended by Mayor David Apatang, Bridge Capital COO, Jody Jordahl, and CFO Clay Crawford, and other public officials. The fitness stations are now ready for public use.

The installation of the workout stations is a project spearheaded by Mr. John Kevin Baldwin, CEO of Bridge Capital, LLC. It was also coordinated with the CNMI government through Mayor David Apatang’s office. Mr. Baldwin and his company allotted $25,000 for the installation of the new workout stations as well as the repair of the old ones. Dilapidated and missing exercise equipment pieces were replaced to make them suitable for public use again. In retrospect, the workout stations are as old as the pathway itself. Beach Road Pathway was built in the 1990s, which explains the worn out condition of the old exercise equipment in various areas. Four stations are in dire need of fixing; otherwise, they will turn into a health hazard eventually. Hence, the damaged equipment must be replaced before any accidents might occur.

A total of six fitness stations have been installed in the following areas: 1) Susupe’s Kilili Beach area at the south point and across the Ada Gym track and field, 2) the Oleai Beach Club next to The Shack and across from the CDA building, 3) across Mayor Apatang’s office, 4) near the Quartermaster Road by the tank, 5) the 13th Fishermen Memorial and 6) by the bus stop across BankPacific at the north point of the pathway along Kristo Rai Parish.

Some are equipped with a parallel bar and T-bar. There will also be equipment appropriate for physically demanding activities such as push-ups, chin-ups, bench dips and log hops. The workout stations are equipped with instructional posters as well to inform the public on how to use the equipment properly.

A press conference was held last January 25th at the Mayor’s office. COO Jordahl mentioned during the said conference that Bridge Capital would shoulder the installation and repair works as well as the manpower needed to do the job although the Mayor pledged to provide additional workforce if needed or transportation for hauling the equipment.

COO Jordahl said, “Bridge Capital is committed and looks forward to working with the mayor of Saipan in the beautification of the island. We have a history of helping the community, and we continue to get involved in other projects.”

The six workout stations have already been completed since February 10th after more than two weeks of installing and fixing all the ten stations. Work commenced on January 26th. A permit for the installation project was acquired on January 19. It was issued by the Division of Coastal Resources Management of the Bureau of Coastal and Environmental Quality.
Aside from building and fixing the exercise stations, Bridge Capital will also act the steward of the newly furbished stations to ensure that the people of Saipan can use the workout equipment whenever they need to. Supervision and maintenance are among the top responsibilities of the company.

According to him, the workout station project is very commendable. This will encourage the young people in the community to engage in healthy activities. He also said, “We want our kids to be healthy. We need to come up with ways to get them health.” Not just keeping them fit, but also enticing the youngsters to focus their energy away from bad vices and influences.

Mayor Apatang could not agree more. For him, this is an excellent project since everybody could use these workout stations for their own physical conditioning. He continued, “We see a lot of people here at night walking and jogging. I am sure there are younger ones that are utilizing all these equipment.”

Further along, the Mayor is grateful to Mr. Baldwin and Bridge Capital’s contribution himself. He reiterates his praises during the inauguration, saying “It’s a great help, especially for people who come out here and do their daily exercise and physical conditioning.”

Mayor Apatang also urged the people to use the new equipment gently. He pleaded, “Take care of [the workout stations], don’t abuse it and don’t try to break it. These things are here for the purpose of helping our physical conditioning, so please take care of it.”

COO Jordahl also hopes that the locals would use the fitness stations based on its sole purpose, which is for working out. He also vows that Bridge Capital would do its part in supervising all the ten stations to keep them at their optimal conditions. Additionally, Mr. Baldwin saw other workout stations near Suicide Cliff that also need repairs. These stations are on their list, according to the COO.

In connection to this, Representative Guerrero mentioned that other companies operating in CNMI must follow the initiatives of Mr. Baldwin and Bridge Capital with the goal of launching programs and projects that will benefit the community. Apart from the installation of the new fitness stations, Mr. Baldwin also led various community projects including rehabilitation and restoration of several school bus shelters in the island.

Indeed, John Baldwin is committed in improving the life and situation of the CNMI community through his advocacies. Several projects have already been completed, and there are still many others to look forward to.