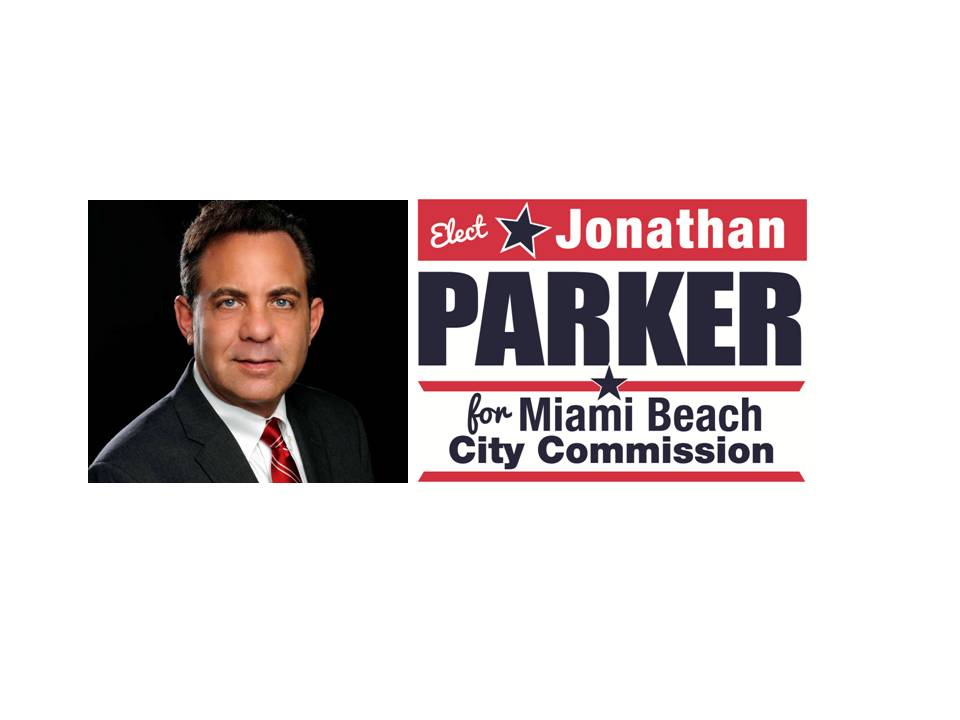 
Miami Beach, FL -- September 25, 2015 – As a candidate for Miami Beach Commissioner Group 4, Jonathan H. Parker, a 25-year Miami Beach resident, has a simple philosophy of integrity that guides his personal and public life: “It’s not just about being truthful, but simply doing what you say you are going to do and not doing what you say you’re not going to do.” As he explains, “It is not only simple, but a SWAN mantra -- it allows one to ‘Sleep Well At Night.’” Parker and his wife Melissa are devout advocates of Miami Beach. One of the few true Miami Beach natives, Melissa was born at Mount Sinai Medical Center, just blocks from where the Parkers live and work.

Parker’s work ethic was formed as a child when his father started him out in the family travel agency which was a Greyhound bus stop. His job was to load and unload the freight and luggage and sell bus tickets. By the age of fourteen, Parker was writing airline tickets and booking world vacations and cruises for customers, an early lifelong experience which provides him with a unique insight into the travel and tourism industry that is the life blood of Miami Beach.

A seasoned attorney at law and entrepreneur who has established a reputation for success, Parker’s high energy combined with diverse experience has been the cornerstone of his work since being admitted to the Florida and New Jersey Bars in 1988 and the Hawaii bar in 2011. He practiced law with two private firms in South Florida before opening Parker & Maloney in 1991, where he protects clients’ rights in the areas of DUI defense and related matters. His legal career has provided diverse and deep experience in family law, real estate transactions, investments, securities law, franchise law, business sales, estate planning and administration, as well as trust preparation.

Parker holds a B.S. degree from Tulane University in New Orleans with a major in Mathematics and minor in Computer Science. He received his law degree (J.D.) from the University of Miami School of Law. Since law school, he has dedicated himself to community service while pursuing his career and business interests. He is the Past President of the Rotary Club of Miami and was formerly a Board Member and Chairman of Major Gifts for the American Cancer Society (ACS) Florida Division, President of New Directions (the young professional group of ACS), and a member of the University of Miami Citizens Board. In addition to supporting the American Red Cross, the Paley Center for Media, Film Society of Miami, and the Humane Societies of Miami-Dade and Broward counties, Parker has handled cases for the pro bono project for the Dade County Bar Association.

While Parker may be new to the political scene in Miami Beach, he has served the city for many years. A graduate of the Miami Beach Leadership Academy, he served multiple terms on the city’s Safety Committee, Police/Citizens Committee, and the Community Relations Committee. After each term, he subsequently sought a position where he could make even more of a positive impact on his community.

The candidate has clear, well considered positions on the major issues facing Miami Beach in this election. Never one to mince words, he advocates easy access to elected officials such as the mayor and commission, concerned that it is difficult for residents and businesses to deal with the operations at City Hall. Parker says that the administration’s current “customer service” mantra doesn’t work because people feel that the city creates the problem and then says “Please let me know if there’s anything I can do to help.” If citizens ask for help, calls go unreturned, they simply don’t know what to do, or the system is so complicated that people just give up. As someone who has had multiple businesses in the area, Parker shares the public’s frustration with permitting, licensing, and code issues.

He supports renovation of the Convention Center, believing that at the very least it should be updated so the city has a world class facility, explaining that “At this point any renovation is better than no renovation at all.” As for the proposed Convention Center hotel, a modern hotel close by is a “must have,” Parker states. The lease is just a way to facilitate the deal without selling city land. Concerning the location of the hotel – either behind the Gleason Center or across from the Convention Center -- Parker’s position is that behind the Gleason Center is better than across from the Convention Center, providing the parking lot is converted to a park, i.e.,“green space.” Unfortunately, the proposed 30-story hotel will not be large enough to accommodate the sheer number of conventioneers that will be attending the new Center. Since the finished product will be out of character with the neighborhood, he is concerned that the city must not make the mistake of opening the door to new developers seeking variances for other properties in the area.

A further question up for debate in this election is the possibility of bringing casino gambling to Miami Beach. Parker feels that casino gambling is not right for the community, due mainly to the fact that Miami Beach has plenty of visitors without this enterprise, which can have many deleterious effects, and casino gambling is readily available in the area and many parts of the country already. “Casino gambling is not the magic pill it was once thought to be,” Parker says. “Just take a look at Atlantic City and other gaming destinations around the world.”

Parker is an enthusiastic proponent of public transportation and the Bay Link light rail which would connect Miami Beach with Miami. “It’s a great idea and should link not just Miami to Miami Beach but the airport to the Beach,” Parker says. “When the world thinks ‘Miami’ they are thinking ‘Miami Beach.’ We have to get our visitors out of the airport and directly to the Beach efficiently, avoiding the necessity of a rental car and the traffic congestion that entails.” He also has definite opinions about the state of mass transit throughout the entire city and county, feeling that routes are complicated and redundant, which can be fixed with effort, coordination, and logic.

There are other major problems to be addressed in this election: traffic, parking, sanitation, and security. Parker’s solutions to these issues are well reasoned and succinct. Traffic problems could be decreased by coordinating traffic lights and redirecting commercial traffic. Sometimes solutions are as simple as deploying police officers to direct traffic around accidents or construction areas and pruning or removing foliage so that street signs, traffic lights, and retail signs are visible, eliminating the “stopping to look” driver or the endless circling to find an address. Parking problems could be solved by adding as opposed to removing spaces due to Citi Bikes on the streets instead of sidewalks where there is room and removing end-of-block bumpers. Residents should have the option of buying a permit for free parking or at a deep discount. Parker says it’s unthinkable that a resident of Mid-Beach or North Beach can’t visit a friend in South Beach and park without the necessity of a guest pass, stating “It’s all one city and we don’t apportion taxes according to where we receive them from geographically.”

Regarding security, many residents complain about crime in certain neighborhoods. “We have to support law enforcement and not hinder protection because we are fearful of 20/20 hindsight analysis,” Parker explains. The police need to be able to do their job with full support of the residents. “We also need to instill a sense of community in our residents so that they get to know and care about their neighbors. A ‘neighborhood watching’ is probably better than a ‘neighborhood watch.’”

Last but not least, Parker relates that right now the residents he talks to are telling him that they feel forgotten by City Hall in favor of “tourist mayhem” and “development gone wild.” “While tourism is our main industry and the city must evolve with development, we must always ensure City Hall treats permanent residents as its top priority,” Parker says. “People that live in Miami Beach year-round are a special breed that deserve our utmost respect and consideration.”