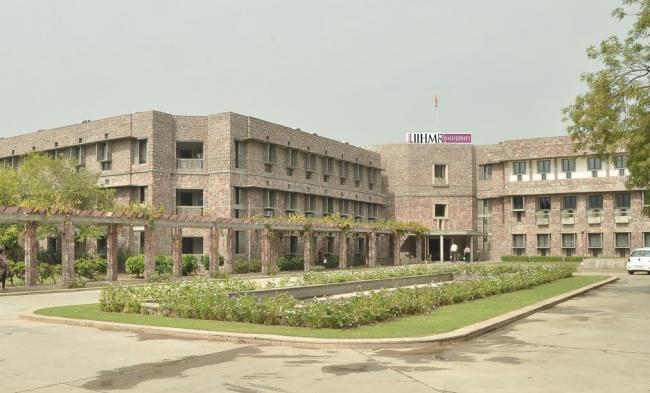 
Mankind is advancing rapidly, a feat that is both beneficial and detrimental for the environment, especially the climate. To throw light on this, IIHMR University Jaipur, in association with Future Health System (FHS), has made a film on climate change and its effect on children. Aptly titled “Children of an Uncertain Climate”, the content of the film is based on “Decoding Child Health Impact under Climate Crisis”, an eminently illustrious study by FHS. This short film delves into the ways Climate Change is impacting a child health in India, keeping in context Sundarbans – a climatically exposed and vulnerable region. The FHS study states that the Sundarbans, the mangrove forest delta shared both by India and Bangladesh is among the worst hit regions of climate change in the world.

There is no bigger threat to humanity than that of climate change, which is steadily undermining the years of progress made in sustenance and development. Here, the most vulnerable strata come from the children, who would have to bear the brunt of adult’s follies. Hunger and malnutrition are directly linked to the shift in a climate, which in turn creates a disorder in the production cycle. The rise in temperature, water scarcity, and air pollution have joined hands to create an inhospitable scenario where children will face a full-forced impact of both water-borne diseases and dangerous respiratory conditions. Unless addressed and tackled properly, the future that one has envisioned for his/her progeny is about to be at stake.

“India, along with the world, is set to move towards a perilous era, plagued in complications caused by our own short-sightedness. Inter-governmental Panel for Climate Change (IPCC) predicts that loss of snow from the Himalayas will result in a rise in the sea levels and reduce the flow of water into the Ganges, Brahmaputra and Meghna (GBM delta) basins. This threatens to leave millions of people homeless, lacking water, food, or access to basic services like health care” said Dr Pankaj Gupta, President, IIHMR University.

To embolden the cause, the film “Children of an Uncertain Climate” was shown at the World Conference on Health and Climate Change that took place on 15 – 16 April 2019. Held in Cannes, France, the conference, called the first ever ‘humanitarian COP’, brought together international experts, operations specialists from various national Red Cross and Red Crescent societies, public and private sector decision-makers, researchers, international organizations and members of the media. This conference has been created to update the variances in modern scientific research, presenting innovative solutions to take up the biggest public health challenge of the 21st century.

“It’s about time policymakers take the cause of children into consideration while drafting climate change policy, research and action. Evidence suggests that children are most likely to experience adverse health effects caused by environmental factors. WHO states that predictions by the IPCC envisage that changes in extreme weather events, undernutrition and the spread of infectious diseases will increase morbidity and mortality due to climate change by 2030 Therefore, we need to ensure that the specific needs of children form the centre of any climate change policies” said Dr. S.D. Gupta, Chairman, IIHMR University.

The film and the study aim to create a powerful conversation which results in the following proactive measures:

· Identify climate change as a risk factor for food security, especially in the island pockets where resources are limited

· Undertake strong surveillance to monitor the growth of the children, especially in the worst-hit regions for prompt action on food insecurity at the household level

IIHMR University is a leading knowledge institution of the country engaged in teaching, research and training in the domains of public health, health and hospital administration, pharmaceutical management, and development studies.Set up in 1984, IIHMRbecame a university in 2014. Over the past thirty-fiveyears IIHMR has carved a niche for itself among management institutions, both in India and abroad. The institute is the World Health Organization’s Collaborating Center for strengthening Health Systems based on Primary Care and is termed as an ‘Institute of Excellence’ by the Government of India’s Ministry of Health and Family Welfare. IIHMR has already conducted more than 500 research projects and studies on the health, social and developmental systems and policies in India and wider South-East Asian Region.

Hire an expert to write a paper for you at writers per hour.
Go to Assignmentgeek.com and get your homework done.
Buy 100% high-quality replica watches with a 2-year warranty and free ground shipping!
Learn about online entrepreneurship at JohannesLarsson.com