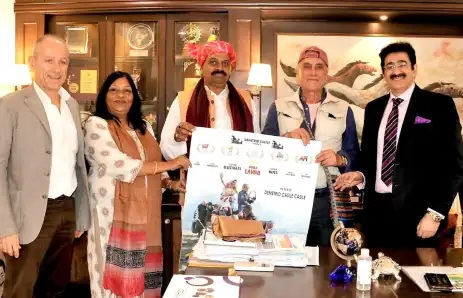 
Noida: Indo Italian Film and Cultural Forum was created to promote and develop relation between the two countries through art and culture. It is a continuous effort. We are trying to bring in best of the people possible from Italy so that Indians come to know more about the art and culture of Italy from the horses mouth,” said Dr. Sandeep Marwah President of Marwah Studios and Chair for Indo Italian Film and Cultural Forum.

The visit of renowned film maker Demetrio Casile from Italy is another feather in the cap of International Chamber of Media and Entertainment Industry. Every visit of known artist adds to the strength of Indo Italian Film and Cultural Forum,” added Vijay Tiwari President of Indo European Chamber of Small and Medium Enterprises.

Dr Sandeep Marwah invited writer, Director Actor Demetrio Castile to be part of 15th Global Film Festival Noida 2022 to be held from 8th to 10th December. The Italian film maker will be showcasing his feature film Shocking Marriage during the festival.

Later a poster of Italian feature film Shocking Marriage was released in a small function by Sandeep Marwah and Demetrio Casile look around the facilities of Marwah Studios.