Writing Workshop by Jolein Laarman from Netherlands at AAFT 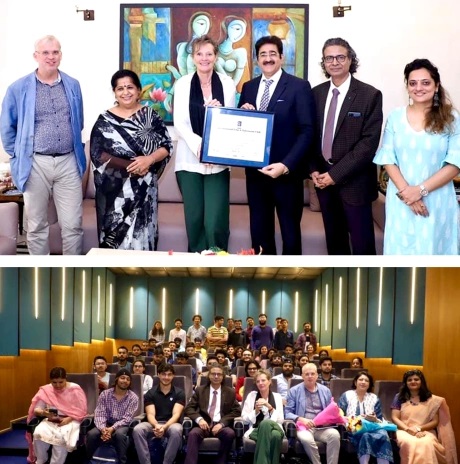 
Noida: A powerful workshop on writing by a well-known writer, art director & producer from Netherlands Jolein Laarman was conducted for the students of Asian Academy of Film and television at Marwah Studios, Film City Noida to support the current syllabus on Writing for Cinema.

“Writing is the best way to express your own self. When you write you share your lifetime experiences with many other people who are nor fortunate enough to have all those kind of experiences during their lifetime. It is the best way to entertain yourself. To write well you must read a lot,” said Dr. Sandeep Marwah President of Marwah Studios initiating the subject.

“People who are part of films, television, and media, must get into the habit of writing. The faintest ink is more powerful than strongest memory. The instances, happenings, your observations can get you write better book, script, and screenplay. You can master in writing only when you start writing,” said award winning writer Jolein Laarman known for her projects like Kauwboy, Do Not Hesitate, Katia’s Sister and many more.

The workshop was followed by a question answer session by the students of cinema and writing department. Dr, Sandeep Marwah presented the life membership of Asian Academy of Film and Television to Jolein Laarman and Wicher J Slater First Secretary from the Embassy of Netherlands who was also part of the program. Later dignities released the first poster of 15th Global Film Festival Noida 2022 scheduled for 8th to 10th December this year.


Other articles by AAFT