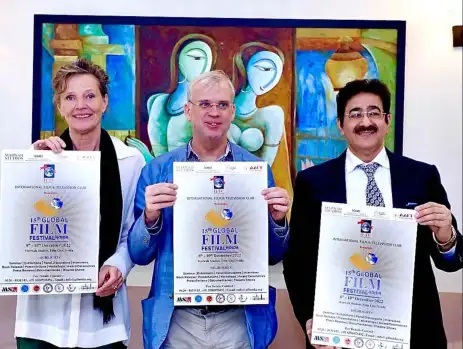 “What a pleasure to be the part of this well known film, television and media house- Marwah Studios. It is a great pleasure to release the poster of 15th Global Film Festival Noida. The 15th edition speaks for itself the stability and popularity of the film festival which has grown so big in all these years,” said Jolien Laarman with excitement in her voice.

I extend my heartiest congratulations to the completer team of Marwah Studios and International Chamber of Media and Entertainment Industry for continuously organising Global Film Festival and bringing the World together through art and culture,” added Wicher J Starter from Embassy of Netherlands.

The visit was well appreciated by Indo Netherlands Film and Cultural Forum which is growing under the chairmanship of Sandeep Marwah. Later Sandeep Marwah honoured the dignities with the life membership of International Film and Television Club of Marwah Studios.