A Galle Lamp and A Galle Vase Combine for $133,750 in Part 1 of Ron Blessing Collection 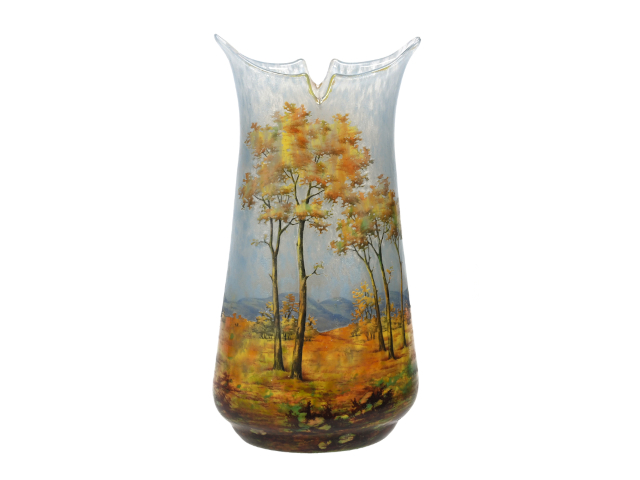 The 30-inch-tall Galle table lamp, the auction’s top lot, was produced around 1920 and featured a beautiful yellow ground with blue/amethyst cameo carved Japanese chrysanthemum overlay and butterfly highlights. It was a magnificent representation of the finest quality and the crowd of about 80 people burst into applause when the final gavel came down at $93,500 (including buyer’s premium).

The circa 1910 Galle cameo art glass vase, 14 inches tall, boasted a lovely ice blue ground with white cameo carved overlay featuring 16 seagulls in flight over ocean waves. The vase had been advertised as a “must-see”, with “the finest detail available.” Bidders evidently agreed, as the piece found a new home for $40,250, good for runner-up top achiever of the over 300 lots that came up for bid that day.

The live auction was held in the Woody Auction hall located at 130 East Third Street, Douglass. Online bidding was provided by LiveAuctioneers.com. "It was an honor to conduct the Part 1 auction for the Blessing family,” said Jason Woody, the operating manager and auctioneer of Woody Auction LLC. “We’re now looking forward to the conclusion to his collection - Part 2 - on March 18, 2023. Watch the website for details.”

Following are additional highlights from the auction, which attracted 24 phone bidders and 12 absentee bidders in addition to the in-person crowd and very brisk online participation. All prices include the buyer’s premium.

Third place went to a turn-of-the-century signed Daum Nancy French cameo art glass pillow vase, 5 inches tall, having pink and green mottled ground with excellent cameo carved relief of a wild floral scene featuring dandelions, clover and daisy décor. The original Paris jeweler’s label was still on the base of the vase, which finished at $21,850.

A 12-piece dining set by R. J. Horner in the Oak Busted Lady pattern was “the most complete Horner dining set it’s been our privilege to sell,” Woody said. The set featured an 82-inch-tall china cabinet with four glass shelves, a buffet with beveled mirror, a sideboard, a table with three leaves (95 ½ inches long when fully extended), two armchairs and six side chairs, all with claw and ball feet ($18,700).

A two-piece American walnut bedroom set in the Renaissance Tassel pattern, featuring a 112-inch-tall by 84-inch-wide by 64-inch bed (full-size), plus an equally tall dresser, brought $14,000. The set was purchased by Mr. Blessing and put on display in his warehouse in near-perfect condition, but the crown piece on the dresser fell and other parts came unglued. But it was still a fantastic set.

A pair of Victorian brides baskets made it into the list of top lots. One, 13 ¾ inches tall, had a pink satin herringbone mother of pearl melon ribbed bowl with green interior and a heavy enamel chrysanthemum décor, set on a Meriden #01530 silverplate frame featuring full figure rampant lions. It went for $7,000.

To learn more about Woody Auction and the firm’s calendar of upcoming auctions (including Part 2 of Ron Blessing), please visit www.woodyauction.com. Updates are posted often.