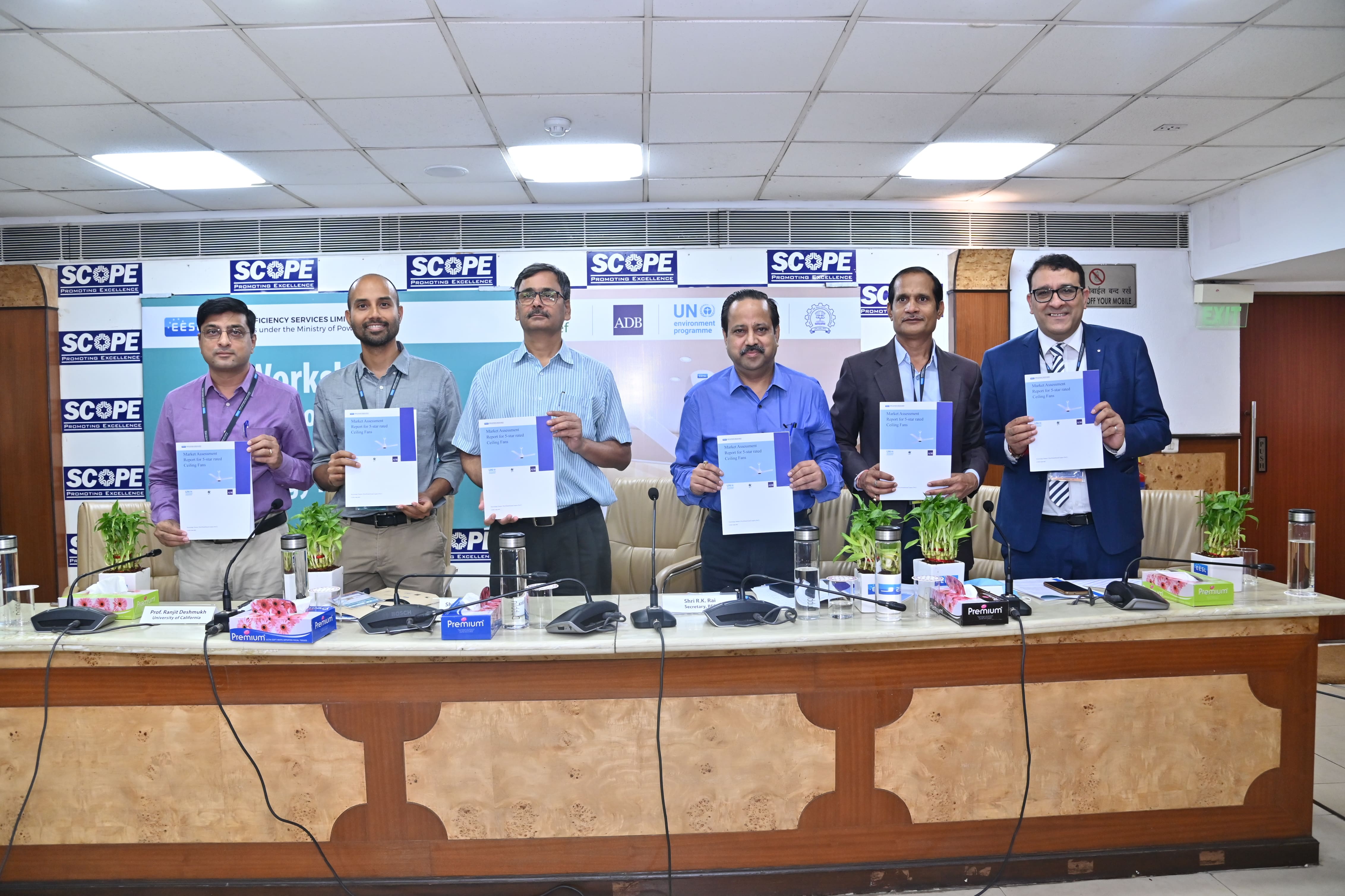 
New Delhi, 09th September 2022: With the aim to augment its sustainability initiatives, Energy Efficiency Private Limited (EESL), has launched 5-star rated ceiling fans with brushless DC (BLDC) technology in India under the UJALA programme. These fans have been launched after the success of its pilot project, wherein EESL had procured 1 lakh BLDC fans. As a result, 16 MU of energy savings per annum were achieved as well as 6 crore monetary savings yearly. The BLDC fans have a sweep size of 1200 mm with a power input varying from 28 W ~ 32 W as compared to the 70 ~ 75 W of power consumed by conventional ceiling fans. The programme will leapfrog the current energy efficiency levels and minimize the cooling related electricity demand and associated climate threats. EESL further plans to come up with a tender for additional procurement of 1 Lakh BLDC fans soon.

EESL has distributed over 23.5 lakh energy efficient fans under Energy Efficient Fan Programme across India. With the rapid urbanization, growing temperatures and increase in per capita income, the need for cooling solutions is poised to rise multi-fold in the coming years. This will subsequently trigger a surge in power demand. Given India’s nascency in the clean energy sector, energy efficient fans are the most optimum and cost-effective solution for reducing electricity consumption. A typical BLDC fan by EESL consumes about less than half of the power used by induction motor-based fans. Solutions such as these are crucial, as they are accessible for the vulnerable population of the nation with limited resources for cooling technologies such as fans or air conditioners.

Speaking about the launch, Shri Arun Kumar Mishra, Chief Executive Officer, EESL said, “Sustainability and affordability lies at the core of all EESL’s initiatives as well as programmes. We should always begin with the end goal in mind and with the launch of BLDC Fans we can trigger its large-scale adoption in the energy efficiency market as it is the right thing to do.”

To bolster its energy initiative further and accelerate the adoption of efficient ceiling fans, EESL with the support of the United Nation Environment Program (UNEP) undertook a study “Market Assessment Report for 5-star rated ceiling fans” in India. The report provides a comprehensive overview of trends of the Indian ceiling fan market, the gist of barriers and enablers for accelerated adoption. EESL also organized a workshop on “An Evidence-Based Cooling Strategy for India,” with dignitaries from BEE, EESL, IIT Bombay, PWC, CEEW, UNEP, Tata Power, University of California sharing insights on the policy and implementation aspects for expanding the reach of energy efficient cooling in peri-urban and rural parts of India. The workshop also presented a first-of-its kind analysis of real-world performance of and demand potential of BLDC fans in low-income rural market setting, a study conducted by University of California, USA, and IIT Bombay, India. The discussion held during the workshop introduced some scalable solutions for the mass adoption of sustainable cooling while creating socio-economic impact for hard-to-access markets.

Prof. Jayendran V, IIT Bombay, and Prof. Ranjit Deshmukh, University of California observed that, "To incentivize efficiency investments immediately and improve access to sustainable cooling, policy makers need to find ways to reduce the cost of purchasing BLDC fans in low-income market segments that can support very high demand. EESL is strategically positioning to facilitate the transition to efficient appliances, and thus avoid the 'lock-in' of inefficient cooling devices that can result in significant recurring costs to households, DISCOMs and the environment in coming decades."

A joint venture of NTPC Limited, Power Finance Corporation, Rural Electrification Corporation and POWERGRID, Energy Efficiency Services Limited (EESL) was set up under Ministry of Power to facilitate implementation of energy efficiency projects. EESL is a Super Energy Service Company (ESCO) that seeks to unlock energy efficiency market in India, estimated at Rs. 74,000 crore that can potentially result in energy savings of up to 20 per cent of current consumption, by way of innovative business and implementation models. It also acts as the resource centre for capacity building of State DISCOMs, ERCs, SDAs, upcoming ESCOs, financial institutions, etc.