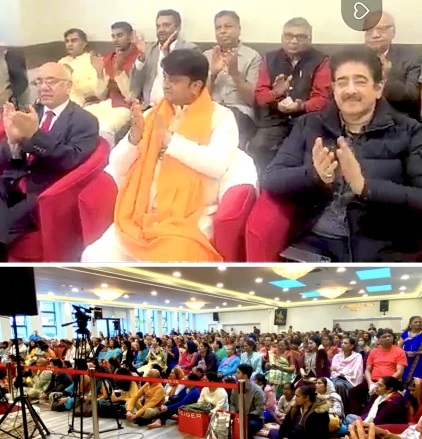 We are pleased to have with us Chancellor of AAFT University and Chief Scouts of India Dr. Sandeep Marwah who has been seven times World Record Holder and President of World Peace Development and Research Foundation. He has reached to 145 countries of the World and has spread the word of Peace through art and culture,” Sewak of the temple introduced Sandeep Marwah to more than 600 people in the jam-packed auditorium.

H.H. Rajrajeshwar the founder of International Siddhashram Shakti Centre honored Dr. Marwah and blessed him for good health and promotion of activities in Peace formation. Dr. Marwah was also appreciated by Virendra Sharma Member Parliament (House of Common). Dr. Marwah met many dignities during the session at Sanatam Temple.

I am more than thankful to H.H. Rajrajeshwar Ji for his kind gesture and giving me so much of love and respect which is more than my expectations. I will never forget this day in London,” said Sandeep Marwah.