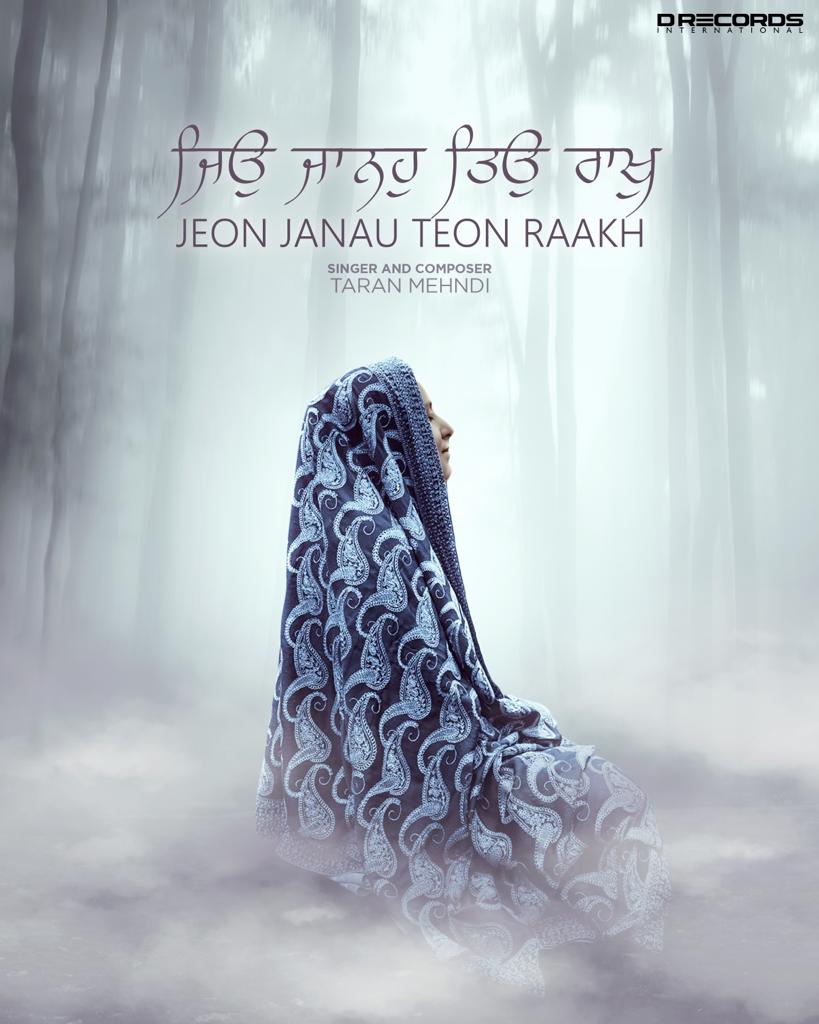 
Jeon Janau Teon Raakh (literally meaning, Save Me, Protect me as YOU choose to, as YOU WILL, as whatever way pleases YOU Dear Patshah Ji) a profound shabad composition by Taran Mehndi, artiste and founder of a leading Indian music label DRecords International.The singer-composer had released a teaser of this yearning prayer on the martyrdom day of Sri Guru Arjan Dev ji, on June 3. It was created by Daler Mehndi Folk Studio under the guidance and direction of her husband Daler Mehndi.

Sharing a deeply personal anecdote about the birth of this composition, Taran Mehndi reflects on an evening, whence the wisdom of Shabad came to her like drops of rain on a parched land.

“I was walking up the stairs to the mezzanine floor of a Guru’s blessed souls’ home. My heart was flustered with sadness that day. As I climbed the stairs, instantaneously my heart, my teary eyes, my consciousness was held by the Shabad Wisdom, caressing my broken spirit, collecting me piece by piece, making me whole, bringing me in Oneness. I don’t remember what incident had broken me that day but I am in deep deep gratitude to Patshah ji for both that incident and then the Divine experience, the cajoling, the hand holding, for bringing to my consciousness the fifth Nanak, Sri Guru Arjan Sahab ji’s Bank “Jeon Janau Teon Raakh”.

I had never sung or read the Shabad before that day,” says Taran Mehndi, CEO of DRecords, who is also an architect, film maker, an author and a seeker.

Considering herself lucky to be sharing the blessings of the Shabad to a larger audience, she goes on to add, “I entered the small lovely abode which could barely inhabit 7 or 8 bodies. Drenched in this love and in the knowledge that I am being held by my Guru…I sat for the Haazri, eyes closed, hands on the Vaja… note by note this composition poured out. My Patshah ji’s gift to me that day which collected my broken spirits and made me whole.”

Amidst and in acknowledgment of all the corruption, intoxication, attachment a soul encounters and gets entangled in, there is a part of it that still recognises the infinite wisdom. Patshah Sri Guru Arjan Sahib ji describes its abject state, the denial, the cheatings, the sedimented state of slumber, of unconsciousness and writes a prayer of surrender, of hope, of mercy.

The shabad is a melodious composition of a soul in awakening, this yearning prayer is an ardas authored by the 5th Guru, Sri Guru Arjan Dev Ji in poetic expression of a Chhant (a poetic meter) on 740 Ang of Sri Guru Granth Sahib.

The singer has to her credit an album titled Mayee Ree, featuring her 7 year old daughter Rabab and her celebrated husband Daler Mehndi.

Last year, Taran Mehndi had produced, directed and sung Loka Samastha, an album on collective consciousness about freedom from biases of genders, age, stereotyping, religion, society stigmas et al. In her directorial debut, she casted 13 characters aged 6 – 73 all facing the camera for the first time. She thoroughly believes music, art, theatre have the power to bring in behaviour change and create much needed attitude of oneness. Kaur has an impressive body of work on Mental Health, videos and songs on leading and living a stress free life is in collaboration with Voyce for WHO.

The full shabad will be available across all platforms. The music is given by Amarpreet Singh and Haider Ali. It is recorded, mixed and mastered by Aakash Jaitly.