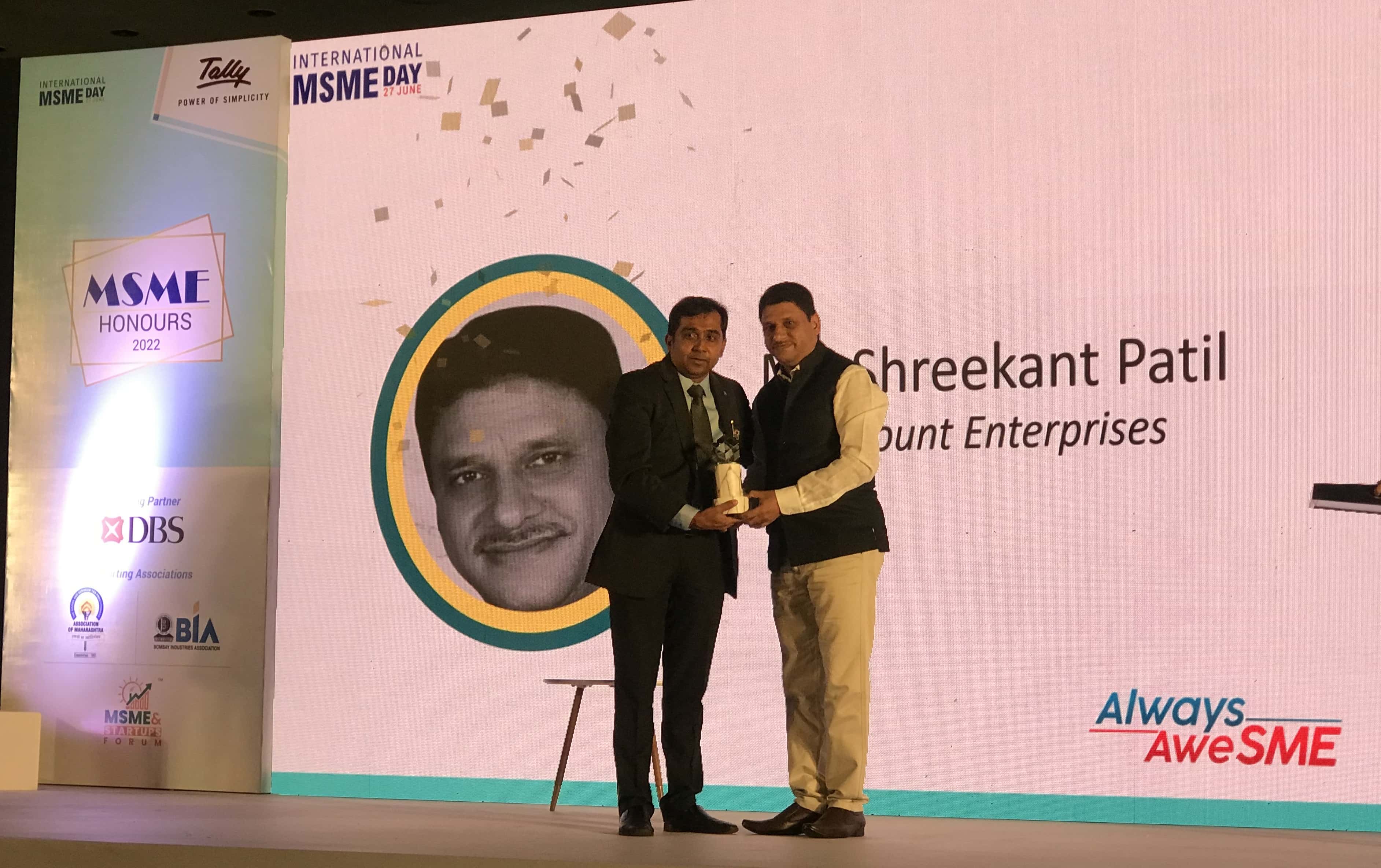 
Mumbai, June, 23rd, 2022, CEngg. Shreekant Patil, founder, entrepreneur at PARENTNashik (Paramount Enterprises, Nashik ) and mentor at StartupIndia, MeitY Startup Hub and AIC-BAMU Foundation, has been recognized for the prestigious award "MSME Honours 2022" under the category of "Digital Transformer" who adapts his enterprise with modern technology in early-stage and yields exceptional results nowadays.
The felicitation of these MSME honours was held at Sahara Star Hotel, Santacruz, Mumbai on June, 23rd, 2022 on the occasion of MSME Day. The guests of honour and speakers presented were Mr.P.M.Parelwar, Director of MSME Development, Mr.Nevil Sanghvi; Ms. Preeti Doshi, Mr.Alok Mehta; and other respected dignitaries.
Mr. Alok Mehta presented Shreekant Patil (Paramount Enterprises) with the MSME Honors 2022 Award for Digital Transformer for his exceptional entrepreneurial journey and agility with modern technology adaptation that transformed to success and aided the nation.
Tally Solutions, a pioneer in the software products industry, selected MSME and entrepreneurs who have done extraordinary work with diversity and positive impact through their best practices at the grassroots level. MSMEs and entrepreneurs with a turnover of less than INR 250 crores and a valid GSTN. The Second edition of MSME Honours received over 1500 nominations from 350 towns and cities across the country and 100 businesses were recognized and felicitated on the occasion of International MSME Day—June 23rd, 2022. Felicitation is done to outstanding entrepreneurs in 5 categories across 4 zones in India
MSME Awards recognize five categories: WonderWomen, Business Maestro, NextGen Icon, Digital Transformer, and Champion of Cause.
Shreekant Patil was recognized for an entrepreneurial journey that began in early 2004 when he was connecting to clients via the internet at a cyber cafe when the internet was not readily available. He used social media to find important clients in India and other countries. In 2004, he had a vision that the next decade would be digital, so he started working on Google and left a mark on it. He uses more than 150+ social media platforms around the world to contact and receive orders for new customers.
Shreekant Patil has never visited any single country since its inception, has business with more than seven countries, and exports 95% of its total volumes to Europe, the United States, and the Middle East. The brand PARENTNashik manufactures and exports robotic parts for spot weld guns being used by renowned car manufacturers such as Ford, General Motors, Honda, and BMW around the world. Shreekant said he wrote hundreds of testimonials with his hands when he didn't have a computer early in the business. This was a very nice job in his life. He used to sit in an internet cafe and research clients around the world and in India.
Shreekant said he used Google to find customers in Europe and the United States. In 2004, everyone just curiously started learning about Google and the Internet, but Shreekant decided to leave a mark, so he learned and implemented in his business to reach an international market and stay ahead of the curve.
At the award function, Shreekant Patil thanked Tally Solutions, which was the only thing that didn't change over time in the 18 years of his business career.
For the past three years, Shreekant Patil has led startups, small businesses, and MSMEs mentoring at Startup India, MeitY Startup Hub, and AIC-BAMU to support the growth of the country and entrepreneurs. Raise startup awareness among college students. That is, hold seminars at various universities, business networking forums, and groups in India and other countries.