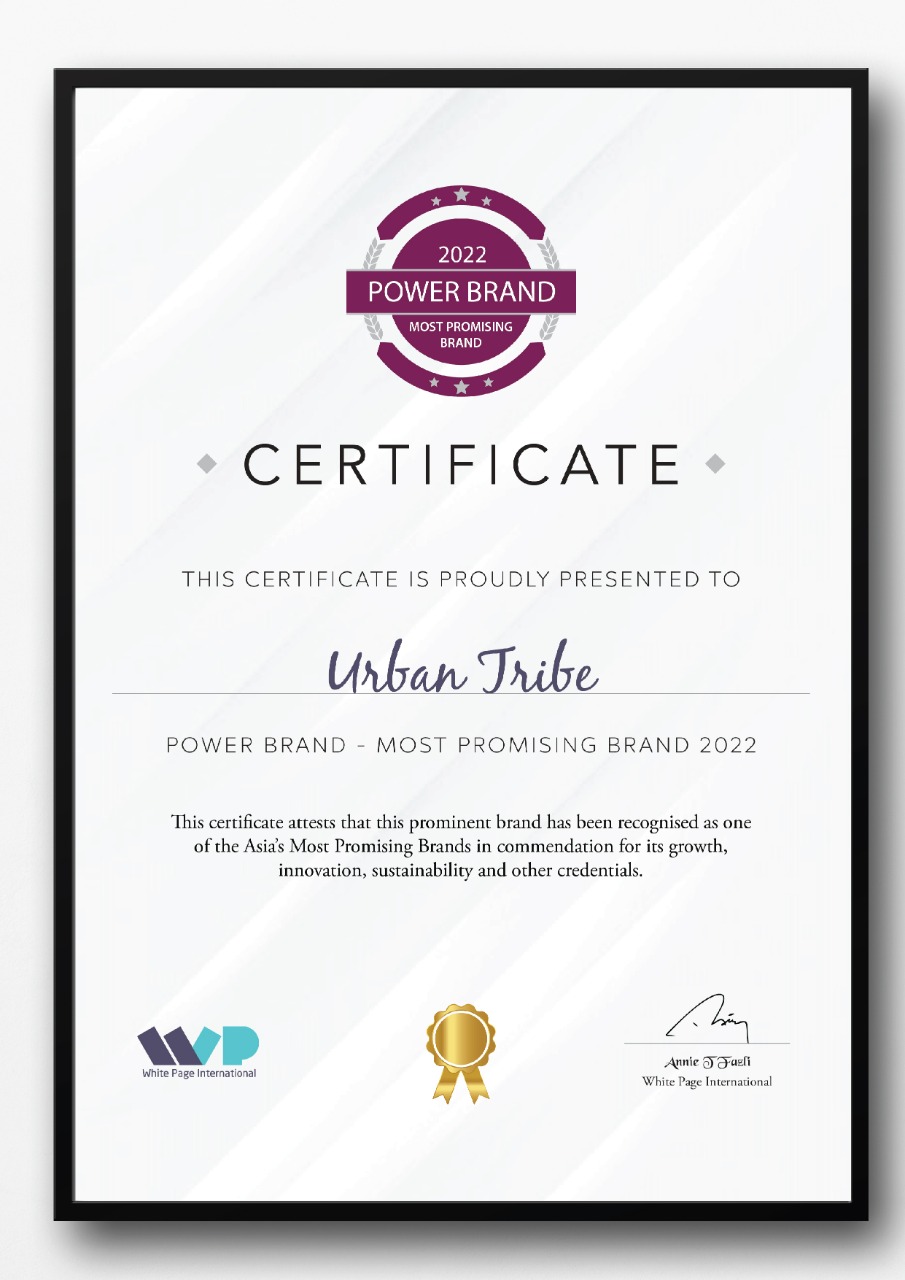 
Urban Tribe is proud to announce that it has been featured in 'Power Brands 2022' as 'The Most Promising Brand'. Chandan Sawera, Founder & Chief Executive Officer of Urban Tribe, was honored with this recognition from the industry leaders and is pleased to have the brand recognized by such an esteemed group. Urban Tribe's goal is to solve problems faced by everyday urbanites — commuters and travellers -– due to the unimaginative and featureless design of the backpacks and other 'on-the-go' gear, they are forced to use due to the lack of innovation.

Urban Tribe began its journey of revolutionizing urban gear space in 2015. Powered by a team of five members based in a humble one-room office, the company now has over 100 employees, rather innovators, fueling the transformation of the sector.

For decades, the urban gear industry had seen little innovation, if any. The designs developed in the late 1960s and the early 1970s went into mass production with the expansion of the industrial revolution and were never withdrawn. With time, the needs of the urban commuter changed — they now carried highly-sophisticated equipment, which was not available when these designs were made. Hence, they had no provision for them. For instance, the backpack designs that became popular in the 1980s had no provision for storing phone charges, digital cameras, tripods or laptops, all the equipment that an urban traveller would need today.

Companies made little changes here and there to accommodate these needs, but, at the end of the day, the truth was that these designs were not meant for the 21st century — the urbanites of today deserved better. Urban Tribe set out to change it.

Even before Urban Tribe could complete a year in the industry, it was awarded by Amazon for being the #1 consistent performer in the luggage brand segment on its portal in India. Urban Tribe has managed to grow at a staggering rate of 120 percent year-on-year despite multiple challenges – lack of investment due to demonetization, compliance issues due to the introduction of the Goods and Services Tax, and the Covid-19 pandemic that disrupted supply chains and brought the market to a standstill.

Over the last five years, Urban Tribe has captured both mind space and market share with its innovative and hyper-functional products for active urban users. With overwhelming growth, the company has been able to invest heavily in research and development, which is a critical part of its mission to bring a qualitative change in urban gear that reflects in the experience of the users. With consistent investment in innovation, Urban Tribe has built a range of products that not only cater to the needs of the urban commuter of today but also preempt the requirements of the future.

Urban Tribe's innovative spirit has empowered and enabled it to outperform the traditional players in the urban gear market. With a robust D2C platform — www.urbantribe.in, urban gear designer and maker that is investing in expansion into new markets at this point. The expansion of the brand has been fueled by the demand generated mostly through organic, mouth-to-mouth publicity.

Urban Tribe today offers products that are both functionally and fashionably better than what its competitors have, and this is clearly reflected in the market. The company dominates the eCommerce market and is currently in the top 1% of sellers on both Amazon and Flipkart. Moreover, it is the preferred gifting partner for over 140 corporates spread across the country for all their luggage/travel gifting needs.

The leadership of the company believes that the decision to keep the research and development budget far larger than the PR budget, which others invest heavily in, has paid off well. For a modest startup-like Urban Tribe, who had forgotten the art of experimenting and starting afresh. The company plans to double down on this approach that keeps innovation at the front and center of the plan for future growth.

Urban Tribe's approach to innovation and design is unique — it is driven by data and number-crunching. Our designs are based on feedback from the end-user, the person at the end of the cycle, and qualitative market research. And with a healthy dose of constructive criticism, which most other brands today want to sweep under the carpet, we produce equipment and gear that is not just fancy but, more importantly, of practical use to urbanites and makes their life easier.

Urban Tribe's product development cycle is not a closed loop. It is an open-ended endeavor that takes the best from every source. Focus groups with a diverse representation in terms of users and geography form the core of the feedback