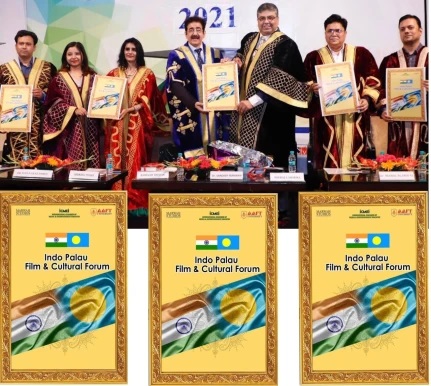 
Noida: “There was a need to create awareness about the Republic of Palau in India. We have been thinking and were looking for the appropriate platform to do so, there cannot be better proposal than launching of Indo Palau Film and Cultural Forum at International Chamber of Media and Entertainment Industry,” said Naresh A Sharma Honorary Consul General of Palau in India.

A poster was launched to mark the launching of the forum from the dice of Asian Academy of Film and Television during the convocation of 2021 batch. “it is a proud moment for all of us and a historical day when Indo Palau are joining hands though the formation of Film and Cultural Forum. I am thankful to Naresh Sharma for trusting us and giving us this wonderful opportunity to prove our caliber and capacity,” said Dr. Sandeep Marwah President of ICMEI and Marwah Studios.

A certificate of Patronship was presented to Naresh A Sharma by Dr. Sandeep Marwah in the presence of large audience whereas Naresh Sharma also nominated Sandeep Marwah as the Chair for Indo Palau Film and Cultural Forum. A copy of MOU shall be signed in the later date.

Get your Explainer Video at 100 dollars only Today.
Hire an expert to write a paper for you at writers per hour.