On Yoga Day, a program named 'Yoga for Humanity - Adopting Equality' was organized by the Satyug Darshan Trust 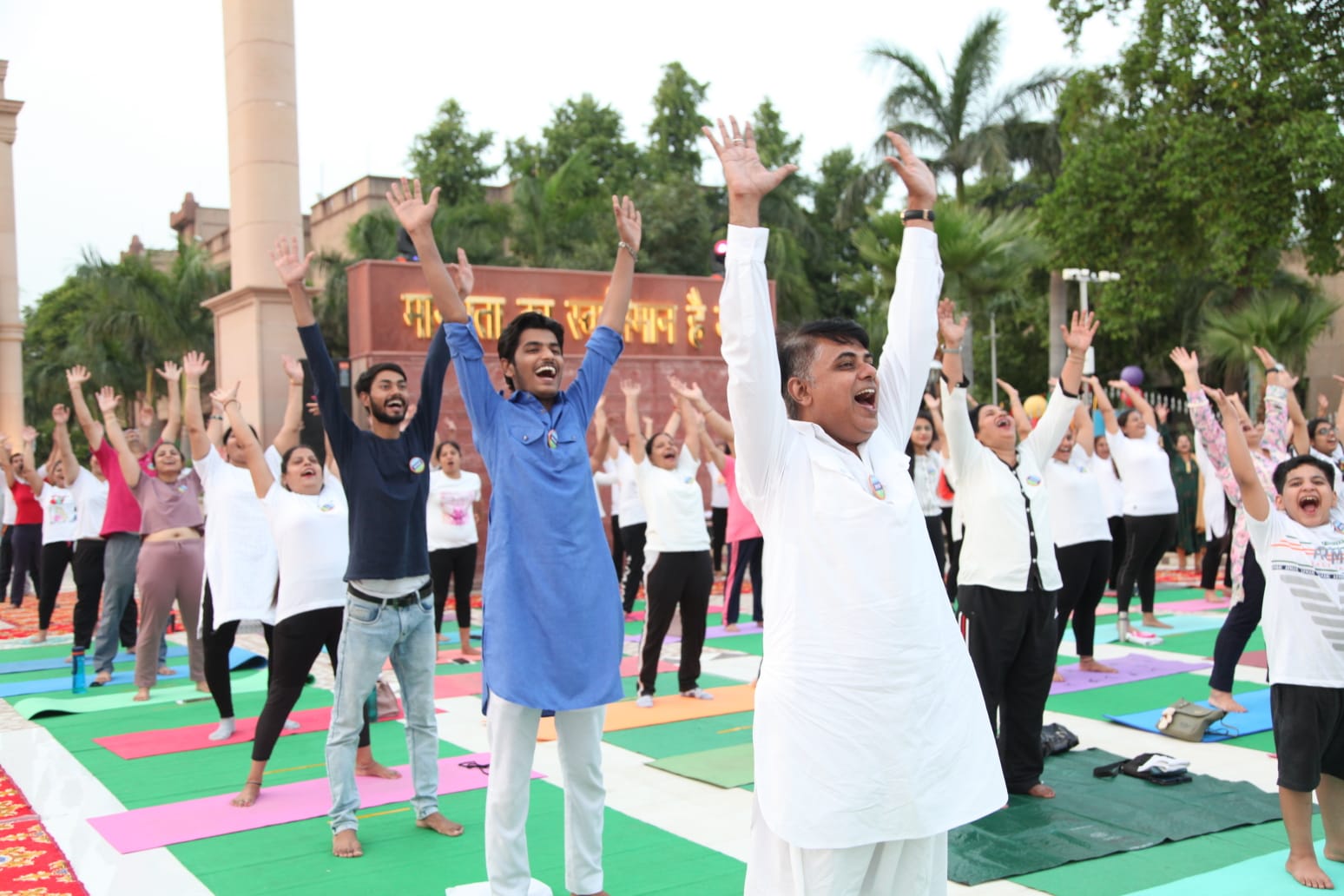 
Faridabad, June 21, 2022: On the auspicious occasion of Yoga Day, a program named 'Yoga for Humanity - Adopting Equality' was organized by the Satyug Darshan Trust in the courtyard of the Dhyan-Kaksh located in the premises of Satyug Darshan Vasundhara, village Bhupani, Faridabad. Hundreds of Yoga enthusiasts participated in this event with great enthusiasm. At the beginning of the program,the need to establish Dhyankaksh i.e. school of equanimity and even-sightedness, the message of humanity being transmitted from here, and the importance of imbibing the Satyugian ethics and code of conduct was passed on.

Then, along with the demos in conduct of yogic activities, it was said that the literal meaning of yoga is, reconciliation/coincidence/union, etc. Symbol of equanimity, this yoga is the means of the union of ‘Surat and Shabd Braham’ or non-dual realization of the union of Aatma-Parmatma (Soul-Divine) and the aim of this yoga practice is Braham i.e. self-realization and attainment of eternal bliss. To achieve this, by chanting the Moolmantra Aad Akshar i.e. Pranav Mantra Om, by controlling the chittvrittis, that is, by removing the extroverted tendencies from worldly subjects, making them introverted, an attempt is made to absorb them in their true form so that every human can attain spiritual knowledge. Understanding the play of Jiva, Jagat, and Braham as reality, following the scriptural commands enthusiastically during his lifetime, can establish the truth as righteous and remain stable in a viceless state and firmly on the idea of 'Me real eternal self is the Lord. Throwing light here in the context of spiritual knowledge, it has been said that self-knowledge is a natural gift in itself and only after properly imbibing this knowledge from the childhood stage, the human's attitude, memory, intellect, and nature can always remain in a pure state and Have high intelligence, high thoughts, one can remain completely self-satisfied.

It was further explained to the attendees through the principles of contentment, self-control, practice, dispassion, sacrifice, and concentration, as the effort to keep the mind absorbed in the Lord through the chanting of the word Mool Mantra Aad-Akshar i.e. the word Om, the self-consciousness is awakened and the mind of man is free from will, becomes stable in an even state. As a result, there is an experience of endless peace and the soul, realizing immortality, attains ultimate contentment. When this happens, bliss is experienced. Only via acting according to one's status i.e. economic ability and need, a person should keep his behavior in a modest and balanced state, in every high and low of life, one learns the art of living patiently while remaining stress-free and disorder-free. Then nothing in the world can distract the mind to itself and the mind hardly falters under any circumstances. This restrained state of the mind situated in the form of the Self is called Sajan's Yoga. Indulging in restlessness, ego-free, in this easy mental state, gentlemen, the ability to receive the good things intelligently develops in that person, and by establishing identification with his omnipresent true nature, he walks on the selfless path of dharma. So, charity earns. It has been said that this yoga practice i.e. Pranav Mantra, Moolmantra, Aad Akshar, carefully connecting one's thoughts with Om, is the wonderful greatness of cultivating equanimity. Through this one can attain the state of self-realization and only the same Brahman can be seen as Brahman for all. Therefore by adopting equanimity, come to one state of unity and be called a yogi of equanimity.