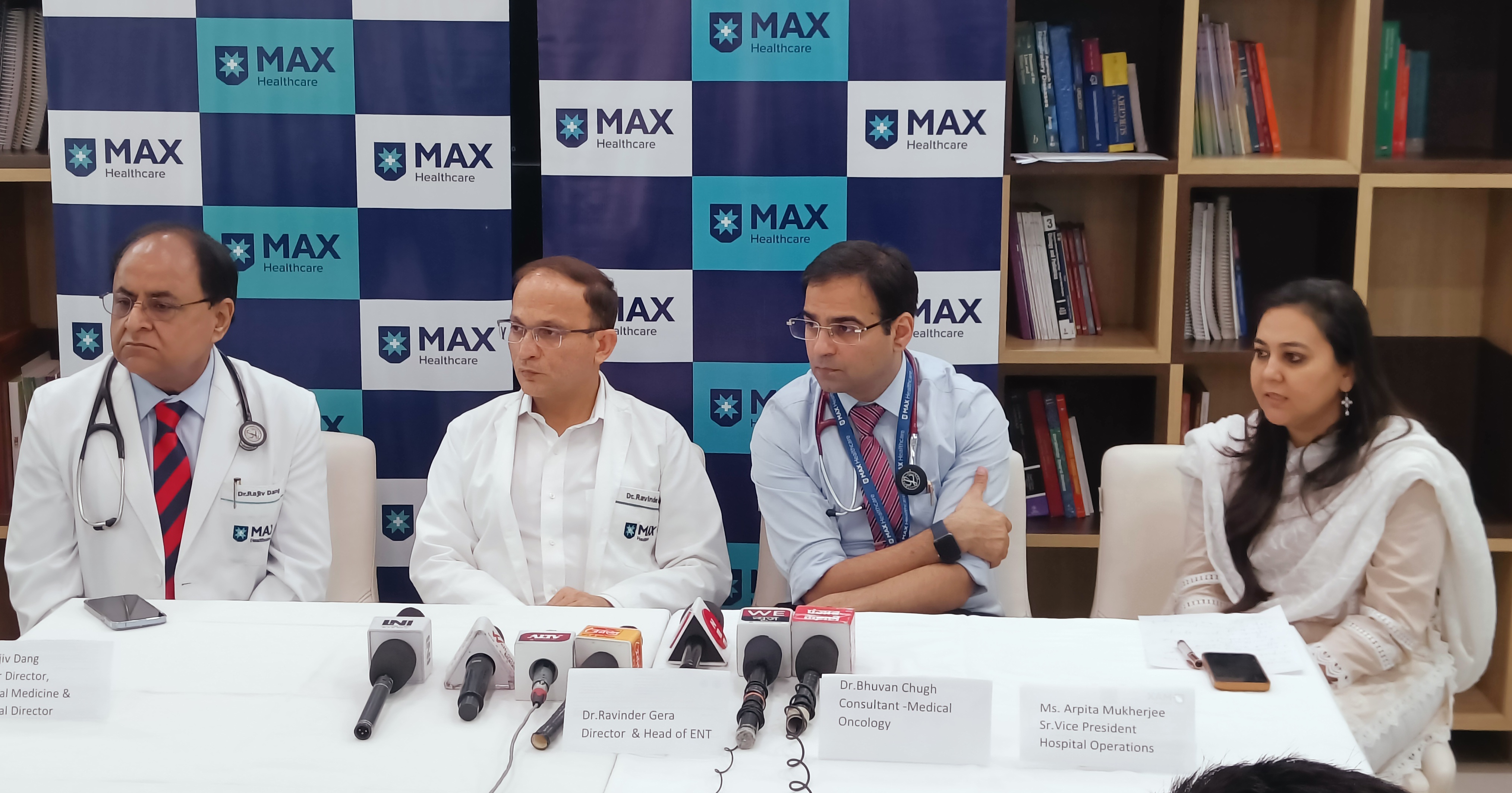 
Tobacco consumption is known to cause serious illnesses including cancer, cardiac issues and stroke. India ranks second in mortality and morbidity associated with oral cancer related to tobacco. In an endeavor to raise awareness and sensitize the public on one of the major preventable causes of plethora of health ailments, Max Super Speciality Hospital, Gurugram announced the launch of their first of its kind ‘No Tobacco awareness & early detection care’ on the occasion of World No Tobacco Day, today.

The new specialised clinic will cater to smokers, with a purpose of screening and diagnosis at an early stage to prevent future complications.

The clinic was launched in the honorable presence of Dr Ravinder Gera, Director and Head of Department-ENT, and Dr Bhuvan Chugh, Consultant- Medical Oncology, Max Hospital Gurugram, among other eminent personalities who addressed the public about the ill effects of smoking and chewable tobacco and the dire need for immediate tobacco abuse
The session is aimed to raise awareness among the masses to pursue healthy habits and regular check-ups. Doctors emphasised on immediate consultations in case if anyone who’s is a smoker from more than 10 years & is above 30 years of age.

“World tobacco day gives us an opportunity to make general population aware of the dangers of using tobacco both to the body and environment. Tobacco use among the youth is an alarming issue and needs immediate attention. Effect of smoking starts with coughing and throat irritation accompanied with bad breath and breathing difficulty. It also leads to a patchy skin and discoloration of teeth. Over the time, more serious conditions may develop, like heart disease, bronchitis, pneumonia, stroke, and many types of cancer, out of which, oral cancer being quite common,” Said Dr Ravinder Gera

According to National Sample Survey Organisation, in India, 6000 children under the age of 14 years get addicted to tobacco every day. 40% of the Indian population over the age of 15 years use some form of tobacco. Tobacco contains more than 4000 types of chemicals that include more than 70 carcinogens and nicotine, which used for a period of time, is addictive and damages the health.

“Since the root cause of the dreaded ailment remains tobacco usage (both chewable as well as smoking form), there is a dire need to raise awareness about the ill effects of tobacco consumption. With proper screening by specialist we can diagnose any early smoking related changes in your body & take early intervention to stop the progression said Dr Gera

As per the recent data of WHO, mortality rate related to tobacco consumption in India, is one of the leading factors accounting for over 10 lakh annual deaths. Being the second largest consumer and third largest producer of tobacco products, a plethora of tobacco products are available at very low prices, making it accessible for all. Tobacco kills over 8 million people every year and destroys our environment through cultivation, production, distribution, consumption thus further harming human health.

The focus of this year’s World No Tobacco Day, May 31, is on protecting young people and helping them avoid using tobacco and nicotine. Smoking is one of the biggest preventable causes of premature death. No matter what your age is or how long you've been smoking, your health benefits will begin as soon as you quit.

“Smoking is deadly. It leads to death, not a few but 12 lakhs of them in a year in India only. And then there is smokeless tobacco which accounts for 90% of all oral cancer burden. We should not be smoking, but we still do! And this leads to multiple disease, and affects almost all organs. The spectrum of tobacco and smoking related illness is expansive and includes brain stroke, heart attack, chronic obstructive lung disorders, cancers of mouth, throat, voice box, lung, pancreas, bladder, pancreas, kidney, liver & stomach to name a few. And this is the reason a specialized clinic to cater to smoking related disease makes sense. The purpose is to screen for smoking related disease and try to diagnose them at an early stage. It includes clinical examination and Chest X-ray under the guidance of an ENT doctor and a cancer specialist.” Said Dr Bhuvan Chugh

“This is a good initiative by our doctors recognizing the rapidly growing numbers of tobacco users. It ranges from teenagers to adults and geriatric population across genders. The No Tobacco Awareness & early detection Centre at Max Hospital, Gurugram, will be a unique one stop shop to address health concerns amongst tobacco users,” said Arpita Mukherjee, Senior Vice President & Head, Max Hospital, Gurugram.

Attributing to the highly addictive nature of nicotine present in the cigarettes & its harmful effects on body , one should get himself diagnosed & screened for any early signs.