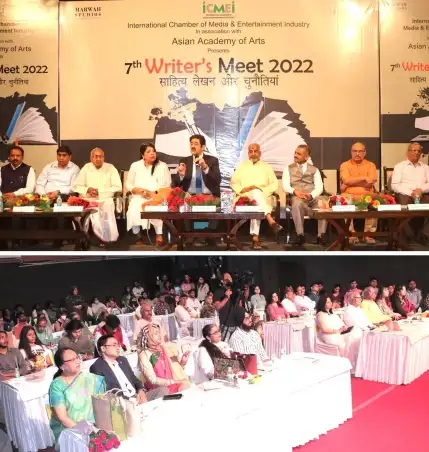 
Noida: “Writing is an art and a craft that needs to be developed through deliberate practice and study over a long period of time. If you don’t have time to read, you don’t have the time to write also- that’s what I have learned. If there’s a book that you want to read, but it hasn’t been written yet, then you must write it and be a part of our mission at Writers Meet,” said Dr. Sandeep Marwah President of Writers Association of India addressing writers from all over India and abroad during the 7th annual writer’s meet at Marwah Studios, Noida Film City.

“Fortunately, some of the world’s greatest writers, the ones who mastered the craft and whose names have been passed down to us through time, gifted us not only with their stories. Many of them took time in-between the creation of their novels and short stories and poems to codify their writing philosophies, their writing strategies, and their writing habits,” added Dr. Marwah while releasing two of the books including Shabdon Ke Indradhanush by Mamta Soni and Bandhu Ke Mukh by Pratibha Johri.

Sushil Bharti Secretary of Writers Association of India welcomed everyone and narrated the reasons of formation of this powerful body. He also mentioned the series of events and book releases happened during the last year.

Former Prof. with Jamia Milia Islamia Dr. M.P. Sharma talked about the role of research in better and authentic writing works. Kaushal Kumar Deputy Commissioner in Ministry of Water requested writers to also touch the technical subjects to make our generation little more aware of progress of this nation.

Veteran RSS worker Dr Dinesh Upadhyay expressed the importance of our Indian culture, traditions and powerful history which has been moulded according to the wishes of our rulers. President of International Hindi Samiti USA Inderjeet Sharma informed the house about the promotion of Hindi language in foreign nations.

General Secretary of Surya Sansthan Devendra Mittal and many other writers expressed their views during meet. The event was supported by International Chamber of Media and Entertainment Industry and AAFT University of Media and Arts.