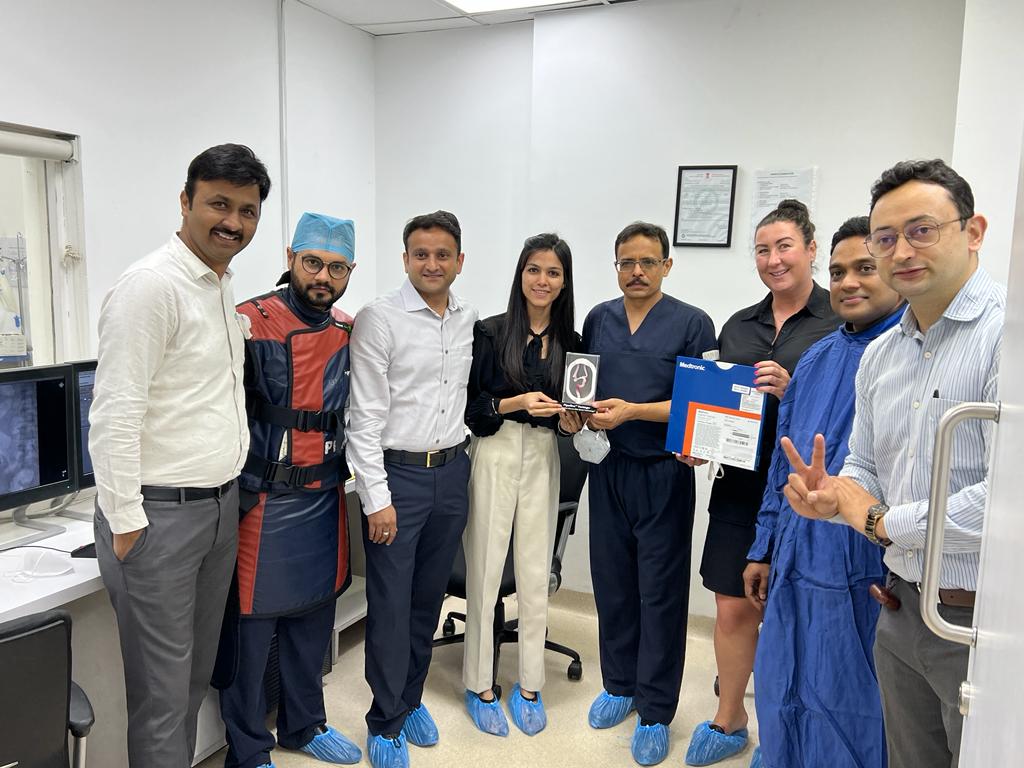 
In a first of its kind surgery performed in the South East Asia region, the neurointervention team at Artemis Hospital saved the life of a 48-year-old lady suffering from brain aneurysm. While the flow diverters are among the most effective and the newest technologies available for treating aneurysms, could only be placed in larger blood vessels of the brain. With the advent of a new generation device – Pipeline vantage, doctors at Artemis Hospital become the first in South Asia and India to successfully place the smallest flow diverter and save the life of the ailing patient.

The patient had brain hemorrhage few years back due to a ruptured aneurysm for which she was treated by coiling in the emergency period, where she made complete recovery. However, due to the badly damaged blood vessel a small part of the aneurysm had to be spared which on follow up angiography started to grow again. Since the patient was at a risk of repeat haemorrhage and the aneurysm which had grown again was not possible to be treated by coiling, team decided to use a flow diverter.

“We are proud to have performed the first case of using Pipeline Vantage flow diverter in the country. Practised delivery in a flow model to get feel of the device followed by a case of complex MCA aneurysm. The combination of lower profile as well as shield technology (which reduces platelet aggregation on the device) is likely to make it a useful device for flow diversion in distal aneurysms. Since the aneurysm was on a small blood vessel, we used the latest Pipeline Vantage device. The procedure was successful and patient made complete recovery. The thinner device which could be placed through smaller tubes made the procedure possible and safer. This device can be used to treat many more patients with complex brain aneurysms quite successfully using the modern generation flow diverter device.” Said Said Dr Vipul Gupta, Director, Neurointervention, Agrim institute for Neurosciences, Artemis Hospital

Cerebral aneurysms are swelling in the blood vessel of brain due to the weakening of its walls that causes a bulgy appearance. These aneurysms can burst and cause massive bleeding in brain known as subarachnoid hemorrhage(SAH). If not treated in time, patients tend to bleed again, and few survive the disease. SAH is always an emergency because ruptured cerebral aneurysms continue to be a significant cause of death which can be significantly reduced if treated early. Rebleed due to re-rupture of aneurysm is a very important factor, which makes early treatment all the more important. With modern surgical and interventional (endovascular) techniques, most of the aneurysm can be treated with reasonable safety.

“In the previous era open Surgery was the only option of treatment. However, problems with surgery include invasiveness and trauma to normal brain parenchyma. Thankfully, nowadays most of these patients can be treated by minimally invasive technique of Endovascular Coiling Of Aneurysms.

However, certain complex aneurysms cannot be treated by coiling and for these patients, a Flow Diverter device is used to repair a badly damaged blood vessel of brain. This intervention is an endovascular technique in which a cylindrical, metallic mesh stent is placed inside the blood vessel containing aneurysm to divert the blood flow from aneurysm. The wires of the device are built in layers so that despite small size it is visible to the doctor on fluoroscopy. These devices are also coated with special material (Shield technology) which reduces chances of any clot formation and one can use less anti-platelet (blood thinning) drugs, improving the safety for the patient. Over time, the aneurysm heals, preventing any rupture.” Added Dr Gupta