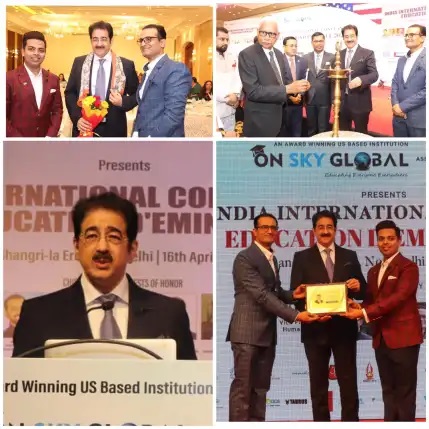 
New Delhi: Dr. Sandeep Marwah Dada Sahib Phalke Foundation Award holder has already been honored many times for his seven World records in film, television and media education. He is the case study in 27 countries of the World. He is the founder of Noida Film City, Marwah Studios and Asian Academy of Film and Television. He is the Teacher to 20,000 media professionals from 145 countries of the World. His presence has added colors to the education summit,” a citation was read by the anchor person.

The award was presented to Dr. Sandeep Marwah by the organizers Dr. Varun Gupta and Dr. Naresh Malhotra of India International Education Conclave 2022 in the jam packed hall, full of educationists from India and abroad at Hotel Shangri-la.

We need to learn how to be an ambitious with better attitude. Believe in yourself, the system, establishment, parents, teachers to bring in best out of them. We all must give emphasis to communication and Commitment to prove your worth,” said Dr. Marwah in his inaugural speech. Earlier Dr. Sandeep Marwah also inaugurated the conclave by lighting the ceremonial lamp.

Hire an expert to write a paper for you at writers per hour.
To ensure stability and reachability of your applications at all times, remote DDoS protection can keep your hosting services online
Buy 100% high-quality replica watches with a 2-year warranty and free ground shipping!