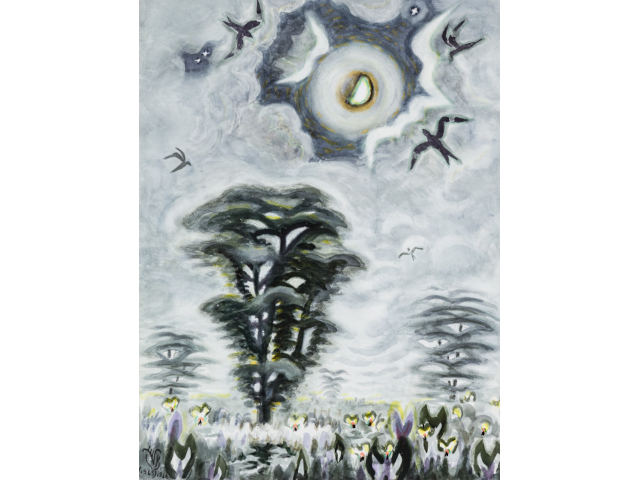 
Milford, CT, USA, May 7, 2022 -- Shannon’s achieved jaw-dropping results in their Spring Fine Art Auction held April 28th. The sale focused on quality over quantity and the results proved the excellence of the offerings. Over 82 percent of the 129 lots offered were sold, for a total of $3.5 million. Prices reported below include a 25 percent buyer’s premium.

Shannon’s once again achieved remarkable results for a collection of works by Charles Burchfield. Nighthawks and the Moon led the collection, and the sale, bringing $587,500 to a private family collection. Fires of Spring in Big Woods sold for $275,000, while Raindrops, May 1917, went for $156,250 to a private collector and first-time auction buyer.

There were numerous six-figure prices realized during the exciting and lively auction. The audience was not missed, as the bank of 20 telephone bidders, active internet participation and auctioneer, Peter Coccoluto, kept the energy level high.

In addition to the Burchfields, other works on paper did extraordinarily well. Maurice Prendergast’s Picnic, a mixed media on paper, sold for $187,500. A John Marin watercolor, titled Marin Island, Small Point, Maine Series No. 14, from 1928, sold for $131,250. And, an Andrew Wyeth watercolor, Gate Chain, with extensive provenance and exhibition history, sold for $112,500.

American Impressionist artists were well represented in the auction, and the quality examples were recognized and sought after by bidders. Pennsylvania Impressionism led the category with a 32 inch by 40 inch John F. Folinsbee, titled Huckster’s Cart (1922-1924), that sold for $162,500. The painting was well documented and illustrated as the centerfold of Kirsten Jensen’s monograph on the artist Folinsbee Considered (Hudson Hills, 2013).

Two Impressionist New York Cityscapes by Guy Carleton Wiggins were sold: Broad Street and the Sub Treasury, which achieved $112,500, and an early Wiggins, Fifth Avenue Snowstorm, which sold for $75,000. A rare, early Tonalist view by Birge Harrison of Madison Square Looking Toward the Flatiron, from circa 1910, sold for $87,500.

There were two floral paintings by Edmund Tarbell and J.A. Weir, fellow artists from ‘The Ten’, a famed group of American Impressionists. Tarbell’s still life of Peonies from his New Hampshire garden sold for $81,250, while Weir’s Rhododendrons from his Connecticut farm sold for $37,500.

The full results of the sale can be viewed at www.shannons.com.