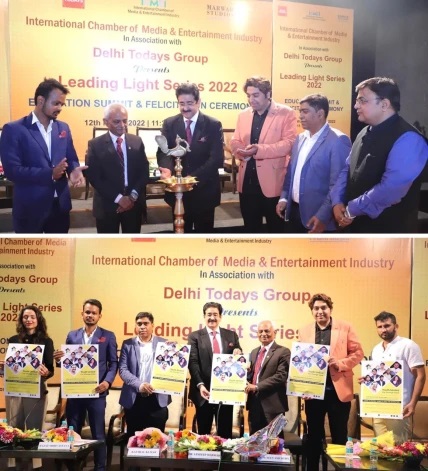 
Noida: “Education is the most powerful weapon which you can use to change the world. The foundation of every state is the education of its youth. The great aim of education is not knowledge but action. Education is simply the soul of a society as it passes from one generation to another. The whole purpose of education is to turn mirrors into windows,” said Dr. Sandeep Marwah President of Marwah Studios and Chancellor of AAFT University of Media and Arts in opening remarks at the inauguration of National Education Summit at Noida Film City.

Later Dr Marwah honoured forty head of the institutions, Deans and faculty members from different parts of the country. He also presented the life membership of International Film and Television Club of AAFT to the dignities on the stage.

The Summit was designed by the Education Committee of ICMEI- International Chamber of Media and Entertainment Industry and Rajat Shrivastava of Leading Light Series of Delhi Today’s Group. The event was supported by International Film and Television Research Centre and World Peace Development and Research Foundation.