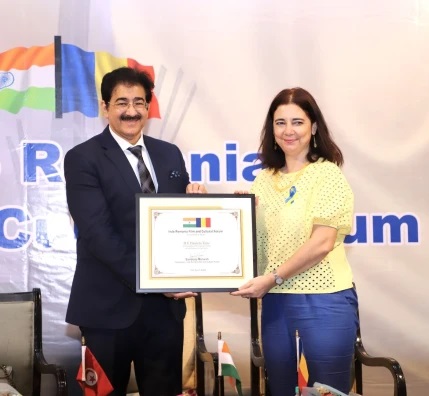 “We are honoured in presenting the Patronship of Indo Romania Film and Cultural Forum to H.E. Daniela Tae Ambassador of Romania to India. We will be able to work in a much faster way under her leadership. Her background & experience in art and culture will uplift the activities of the forum in much organized way,” said Dr. Sandeep Marwah President of International Chamber of Media and Entertainment Industry.

“I take this pleasure in accepting this patronship of Indo Romania Film & Cultural Forum. Together we will do much more in developing and promoting our relations with India,” said H.E. Daniela Tane.

Daniela Tane was part of the first batch of students studying Hindi in post-communist Romania. In 1992 she received a scholarship from the Indian government, for the study of Hindi language and culture, at Kendriya Hindi Sansthan, Agra and this is how she discovered India at 22.

With an MA in Romanian language and literature and a bachelor degree in Political Sciences, both acquired at the University of Bucharest, She decided to apply for a job at the Ministry of Foreign Affairs of Romania (1996). In 2000-2004 she was posted at the Embassy of Romania in New Delhi, as Third, than Second Secretary, in charge of the cultural, educational and political affairs.

She left the comfortable life of a diplomat to work in field missions, for the International Committee of the Red Cross. This is how she discovered Africa, through missions in Ethiopia, Tanzania, Democratic Republic of Congo, Guinee Conakry, Sierra Leone, Uganda and Chad and Nepal. Now she is back in India as a Ambassador of Romania to India Nepal and Bangladesh.