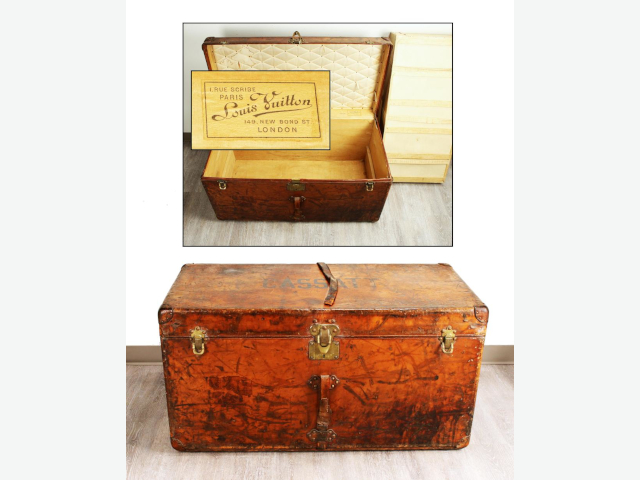 
Paoli, PA, USA, April 13, 2022 -- Converse Auctions will greet the new season and warming temperatures with a huge Spring Spectacular Sale on Saturday, April 23rd, starting promptly at 12 o’clock noon Eastern time. Bidders can travel the world from the comfort of their armchairs to Asia, Africa, Europe and the Americas in this online-only auction that’s loaded with over 600 premier lots.

The catalog is both diverse and tantalizing. Offered will be Chinese items (including an antique rose medallion punch bowl and jade jewelry); a rare Louis Vuitton leather steamer trunk; sterling silver (including a Reed & Barton flatware set and candelabras); an antique German pewter wedding plate; and gorgeous china and crystal (including Lenox, Wedgwood, signed Orrefors and Waterford).

Also up for bid will be lots of Depression glass; mid-century ceramics, glass and aluminum (to include Homer Laughlin Harlequin and Fiesta); fine art (including Rembrandt etchings, an Art Deco portrait, a Van Hoople work, a portrait miniature and an Antonio DeVity painting); African artifacts; furniture (to include Japanese Obi chairs); books and other items.

While the event is Internet-only, with no in-person gallery bidding, online bidding is available at LiveAuctioneers.com, Invaluable.com and ConverseAuctions.com. Live previews will be available by appointment only in Converse Auctions’ gallery at 1 Spring Street in Paoli, Pa., near Philadelphia. To set up an appointment, call 610-722-9004 or email info@converseauctions.com, or use online scheduler at www.converseauctions.com.

With a pre-sale estimate of $2,000-$8,000, the antique Louis Vuitton leather steamer trunk, made circa 1875, is an expected top lot of the auction. The trunk boasts an interior quilted lid and shelf, and all hardware is included (buckles, latches, casters and tacks, marked with LV branding). The label reads, “I. Rue Scribe, Paris, Louis Vuitton, 149, New Bond St., London, numbered 155631.”

The large, 19th century Chinese rose medallion punch bowl is nicely painted with good detail and features alternating panels of flowers and birds with panels of human figures. It has a resounding bell sound when “pinged” (est. $600-$800). Also sold will be a vintage crystal Isabella bowl by Orrefors, with a label on the rim and signed on the bottom. It’s estimated to finish at $100-$200.

The 18th century Reed & Barton sterling silver service for eight comes with many serving pieces, for a total of 47 pieces. It’s new in the wrapping from 1992, never been used, and includes a two-level silver chest (est. $2,000-$4,000). The antique German pewter wedding plate, engraved “Gluck Zum Ehe” (Happy Marriage), should bring $100-$200.

An etching on Arches paper attributed to Rembrandt titled The Card Player (not authenticated by Converse, but with a certificate of authenticity from Baterby’s, 21 ¾ inches by 21 ½, has an estimate of $200-$400, as does a fine old Chinese hand-painted fan painting on silk, signed by the artist upper left corner and featuring immortals, children and cranes in bold, vibrant colors.

Two very different oil paintings have identical estimates of $200-$400. One is a large portrait of a gentleman smoking a Fatima cigarette, with a painted Fatima logo and the tag line, “A Sensible Cigarette, Ligget (sic) & Myers Tobacco Co. 1921”, signed “Charles” with an indistinct surname and dated on the back, unframed. The other is an oil on board depiction of boats in a harbor by Van Hoople (American, b. 1934), who previously worked as a set painter for Paramount Studios.

A vintage pair of Japanese Obi slipper chairs in button tufted raw silk upholstery, purchased by the consignor’s family in 1957 outside of Tokyo, should make $100-$200. Also, a copy Eighteen Songs of the Nomad, The Story of Lady Wen-Chi, a book about the 14th century, 11-foot-long scroll, given to the Metropolitan Museum of Art in 1973, is estimated to command $100-$200.

A large Chinese jade carved and pierced bi disc, 13 inches by 9 inches, carved with dragons and phoenixes and archaic designs, should hit $600-$900; while a pair of green jade bangles in a lacquer dragon box, the inner diameter of the bangles 2 ¼ inches, should realize $400-$600.