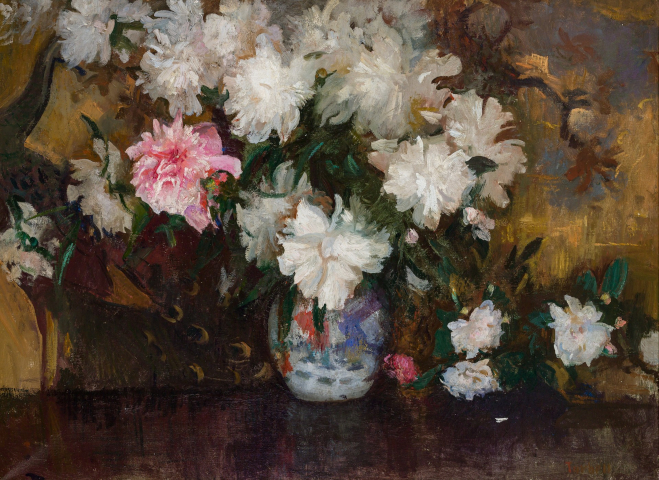 Headlining the auction are three exceptional works by Charles Burchfield (American, (1893-1967). Nighthawks and the Moon, (1965) 1966, 35 inches by 26 inches, was exhibited at ACA Galleries in New York in 1970. The watercolor work is a nocturnal scene of nighthawks circling the moon. In the foreground trees and flowers vibrate in the moonlight, lending a mysterious air to the composition. This painting is easily among the artist’s best (est. $200,000-$300,000).

Another stellar Burchfield, Fires of Spring in Big Woods, measures 40 inches by 30 inches. The poetic title comes from the artist’s journal entry, “There had been forming in my mind an idea of showing deep winter in a woods, but with openings at the top of a hill showing the fires of spring.” Indeed, the trees look as though they are on fire, with the sunlight foretelling the emergence of spring (est. $150,000-$250,000).

The last Burchfield in the group is from the artist’s self-proclaimed ‘golden year,’ 1917, when he was most prolific. This work illustrates a scene from Burchfield’s native Ohio just after a rainstorm. Loosely associated with the Regionalist artists, Burchfield found inspiration in his immediate surroundings. He painted primarily in his native Ohio before he established his studio outside Buffalo, New York (est. $50,000-$75,000). A large painting by Dale Nichols, another artist associated with the Regionalists, will also be offered at $40,000-$60,000.

In the category of 19th century American Art, marine artist Francis A. Silva (American, (1835-1886) leads the group. By the Seaside, New Jersey Shore was painted in 1883 and depicts the beach at Keyport, New Jersey where the artist first met his wife. It is a classic example of Silva’s masterful ability to capture the light at sunset. The sky and water in this painting are equally remarkable (est. $200,000-$300,000).

Other 19th century highlights include a large oil painting by Walter Launt Palmer, Winter Landscape with Stream, estimated at $70,000-$90,000; a Luminist view titled Shipping at Sunset by Edward Moran, estimated at $20,000-$30,000; and paintings by Hermann Herzog, Robert Spear Dunning, William Louis Sonntag and others.

New York City dwellers will recognize the architecture in four impressionist cityscapes. Birge Harrison’s Madison Square Looking Towards the Flatiron Building is the earliest from this group, depicting the city at dusk with horse carriages and glowing gas lamps (est. $50,000-$75,000).

There are three paintings by Guy C. Wiggins (American, 1883–1962), an artist celebrated for his ability to paint New York City in the snow. An early example, Fifth Avenue Snowstorm, is dated circa 1925 (est. $60,000-$80,000). Broad Street and the Sub Treasury is an important example from the peak period in the artist’s career, complete with waving flags, colorful pedestrians and taxi cubs going about their day undeterred by the falling snow (est. $100,000-$150,000). The third painting, Washington Square, is the view from the artist’s studio, a scene he depicted in many canvases throughout his long career (est. $30,000-$50,000).