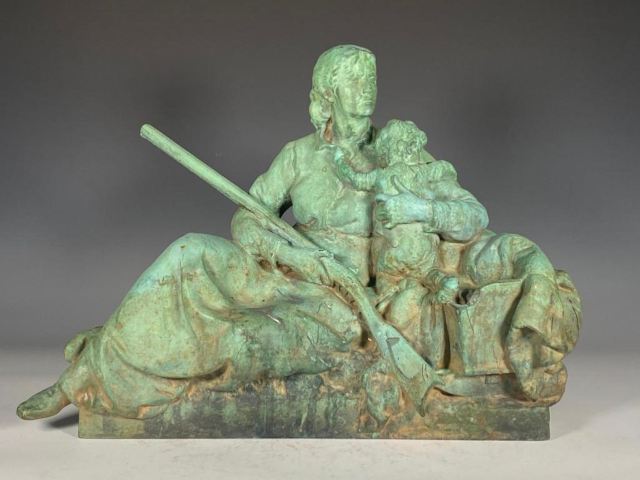 The MacMonnies bronzes were signed by the sculptor, exhibited a nice green verdigris patina and carried the foundry mark for Jaboeuf & Rouard of Paris. The top lot, a very rare cast titled Pioneer Mother, measured 15 inches tall. It was originally designed and cast in monumental form for the Pioneer Monument in Denver, Colorado, erected in 1911 ($27,060). The other, the classic MacMonnies beauty Diana, dated 1890, stood 31 inches tall ($12,300). It was the sale’s third top lot.

The oil on canvas painting by George Hetzel, titled Scalp Level Landscape, Pennsylvania, 1887, was monumental at 30 inches by 50 inches. Artist signed and dated, it depicted a river landscape in the noted Scalp Level area of Pennsylvania, home to the artists of the Scalp Level School in the 1860s.

The baluster form Art Nouveau vase by Paul Francois Berthoud, titled Femme Libellule (circa 1900), was rare and large, at 25 inches tall. It was cast with the face of a woman with flowing hair supported by dragonfly wings and feathers and the base was cast with Queen Anne's Lace flowers.

Following are additional highlights from the auction. Internet bidding was facilitated by LiveAuctioneers.com, Invaluable.com and Bidsquare.com. Prices include a 23 percent buyer’s premium.

Two of the more visually arresting lots were a gouache on paper Map of the Black Sea, executed in 1779 by the Italian cartographer Giacomo Baseggio and nicely housed in a 24 inch by 31 ½ inch frame ($5,228); and a William and Mary quillwork picture signed and dated (1693) to the back of the panel by Elizabeth Drake, depicting a pair of urns issuing floral arrangements centering an oval quillwork, in a 12 inch by 15 inch frame ($4,612).

A vibrant pair of sports-themed 20th century paintings by American artist L. Vinci, found new owners. One, titled Dime Sport (1941), depicted two boxers slugging it out in the ring ($1,722). It measured 29 inches by 21 inches (canvas, less frame). The other was titled Sports Movers (1943) and depicted sprinters leaping over hurdles ($3,998). It was 24 inches by 17 inches (canvas). Both paintings were artist signed, inscribed and dated.

Neue Auctions has a full slate of auctions planned for spring and early summer, beginning with a Fine Interiors auction on Saturday, April 30th; followed by a May Modern Sale on Saturday, May 28th; then an auction featuring the superb Asian & Antiques Collection of Dr. Marvin Drucker on Saturday, June 25th. All three will be online-only auctions and will start at 10 am Eastern time. To learn more, please visit www.neueauctions.com