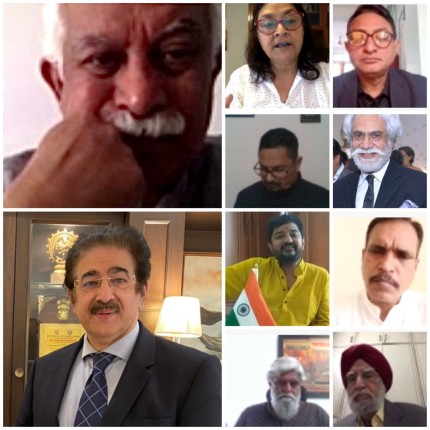 
New Delhi: “This is just to inform you about the media and entertainment upgradation committee of Bureau of Indian Standard under Ministry of Consumer Affairs, Food and Public Distribution where all the segments have been taken into account including education in media and entertainment industry. I am happy to coordinate it through another important committee in AICTE in ministry of Education,’ said Dr. Sandeep Marwah also member of Board of Applied Arts Crafts & Design in AICTE Ministry of Education, during board meeting.

It is suggested that courses related to films and television now can be given AICTE approval for better creditability. Some of the prominent people from the creative World attended the meeting at AICET Board of Applied Arts Crafts & Design.

Dr. Sandeep Marwah is the National Chairman for Media and Entertainment Upgradation Committee BIS Ministry of Consumer Affairs Food and Public Distribution, Government of India, constituted for the setting up the standards for all the segments of media and Entertainment Industry including Print, Radio, Television, Cinema, New Media, Events, Music and Education.