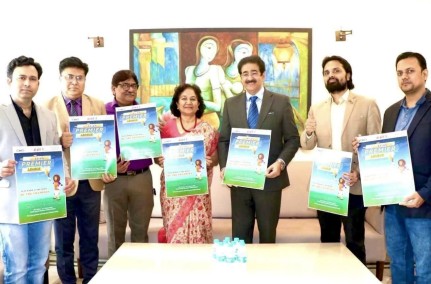 
Noida: A well designed poster, representing a powerful sports week for the students of AAFT -Asian Academy of Film and Television and all the departments of ASMS- Asian School of Media Studies under the name and banner of Asian Premier League 2022 was launched by Dr. Sandeep Marwah Chancellor of AAFT University of Media and Arts at International Headquarters of ICMEI at Noida Film City.

“Sports are about those incredible moments where sheer human will and desire overcomes the odds. These are the moments we remember. A trophy carries dust. Memories last forever. The five S’s of sports training are: stamina, speed, strength, skill, and the greatest of these is spirit,” said Dr. Sandeep Marwah while releasing the poster.

The event will take place at Marwah Studios and Noida Stadium from 29th to 31st March. More than 500 sports person are participating in 9 different games. The rewards and results will be declared on the final day.

Hire an expert to write a paper for you at writers per hour.
Get your Explainer Video at 100 dollars only Today.
To ensure stability and reachability of your applications at all times, remote DDoS protection can keep your hosting services online
Buy 100% high-quality replica watches with a 2-year warranty and free ground shipping!