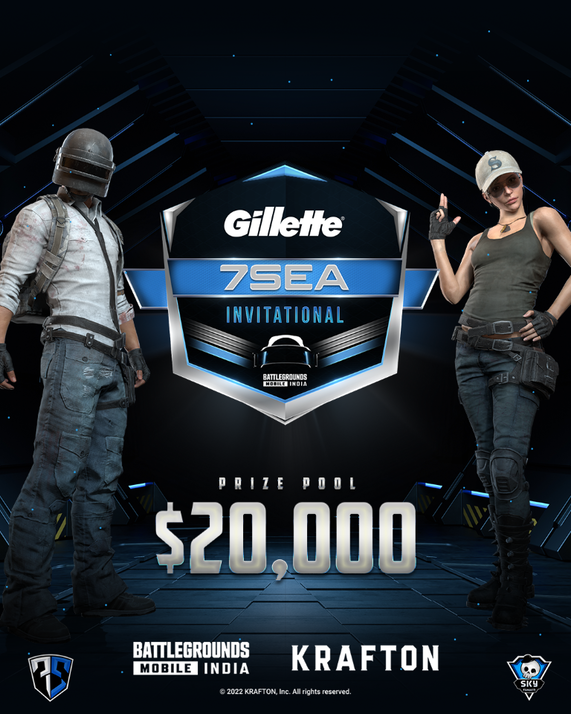 This invitational is an opportunity for the leading Battlegrounds Mobile India esports teams to compete for significant cash prizes.

The Gillette 7 Sea Invitational tournament will feature the top 24 BGMI pro teams from across the country, competing in over 54 matches, including qualifiers and finals. The tournament will take place over the course of nine days, broken into two high-intensity periods from the 25th - 27th March and the 29th March - 3rd April.

Head of Strategic Partnerships at Ampverse, Jenny Hall, stated, “We’re delighted to see 7 Sea and Gillette come together and host this exciting Invitational event produced by our friends at Skyesports. This lively format will feature the leading teams in India and is sure to showcase the best of the best of Indian esports talent”.

The tournament, produced by Skyesports will be broadcast via live streaming and re-screening, including over 200 hours of competition excitement. Viewers can listen to competition announcements and commentary in six languages including both English and Hindi across the 7Sea YouTube, 7Sea Facebook and Skyesports YouTube channels.

This thrilling event also features a tournament prize pool of over USD 20,000.

Commenting on this exciting tournament, Shiva Nandy, CEO and founder of Skyesports, said, “The BGMI esports ecosystem is growing rapidly and the involvement of brands like Gillette and Ampverse is testament to that. We are thrilled to be producing the Gillette 7Sea Invitational with the top 24 teams from across the country and look forward to broadcasting top-notch action to thousands of fans from across the country.”

Ampverse is playing a different game. Ampverse exists to inspire its community by building innovative IP that gamers simply love. Its portfolio includes owning some of the world’s best esports teams, influential gaming talent, Play-to-Earn (P2E) guilds, and a series of experiential-driven products
and gaming collectibles.

It has a blue-chip client base including Disney, Samsung, McDonalds, Nestle, Lazada and Porsche. Ampverse pioneers on a hyper-local, data-driven methodology that helps fuel
its relentless drive towards shaping the future of gaming culture.