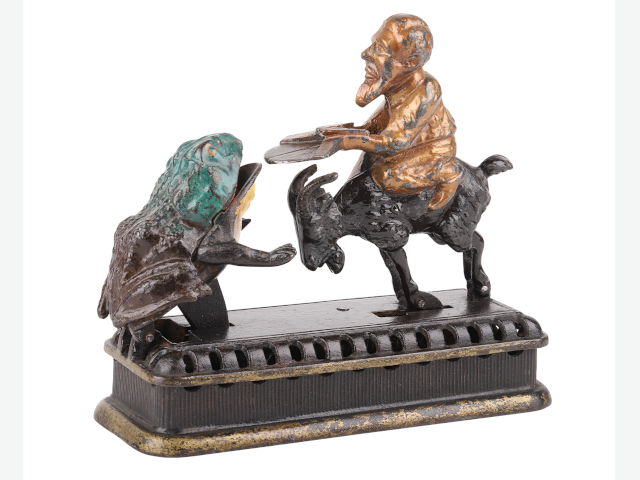 All prices quoted here are in Canadian dollars and include an 18 percent buyer’s premium.

The Edison Class M cylinder phonograph was initially intended for business dictation but in time entertainment became its main role. The phonograph sold came with a ‘Standard’ reproducer, rails for listening tubes and one listening tube. It was sold by Holland Bros., Ottawa, sole importer for Canada. It didn’t have a battery, but that didn’t deter bidders.

A circa 1911 Edison Opera cylinder phonograph, Edison’s top-of-the-line model, famous for its smooth-running motor and self-supporting horn, realized $8,260. The phonograph boasted a rich mahogany finish on the case and bronze tiger striping, which added to its air of quality and luxury. Bidders blasted through the estimate, which was $3,000-$4,000.

Mr. Miller said that condition and rarity ranked foremost in determining the prices for the Tanenbaum collection of mechanical banks. “Overall they did very well, with some great surprises,” he said. “The common thread in this auction was ‘mechanical antiques’. The only thing more animated than the objects up for bid were the online bidders vying to win them.”

A J. & E. Stevens mechanical bank, exceedingly rare and depicting reliefs of Robert E. Peary’s 1909 expedition to reach the North Pole, gaveled for $7,670. Users pushed the flag down, inserted a coin into the slot and pressed forward. The painted cast iron bank showed very little wear and was in good working order. It was made in the U.S. and was patented on July 26, 1910.

A J. & E. Stevens painted cast iron ‘Boy Robbing Bird’ Nest’ mechanical bank, the hard-to-find color variation and in good working order, fetched $6,490. The user raised the limb of the tree to position, placed a coin in the slot and pressed the lever; limb and boy fall and the coin disappears into the tree. The circa 1906 bank was made in the U.S. (Cromwell, Conn.).

A Wurlitzer Model 1015 jukebox (known as the “One More Time” or “OMT” jukebox) was a replica, not an original. It was made in Germany around 1990 and had been updated to play 45 rpm records (up to 50). Boasting multi-color lights, bubble tubes and gleaming chrome on the nostalgic exterior, the jukebox beat its $6,000 high estimate, topping out at $8,260.

Selling for the exact same price was a Rock-Ola Tempo II Model 1478 jukebox, this one an original, made in America circa 1960. It was nicknamed the “Windshield” because it was designed to look like the cars of the era, with big fins and a windshield. The jukebox was in good working order (mono only) and played up to 120 selections of 45 rpm discs.

Returning to early phonographs, other examples in the sale that did well included the following:

- A Columbia Type AS coin-op cylinder phonograph, made in America circa 1898 and an early example of a phonograph intended as an entertainment device (in a restaurant, waiting room or arcade, typically); with horn and all keys ($4,720).

- An Edison Model A Gem cylinder phonograph with a striking blue glass horn, a key-wind two-minute cased phono with the Gem reproducer specially made for the Model A between 1900-1902; with gold pinstriping and black enamel ($4,720).