New Book by Patricia Thrushart - Cursed: The Story of Marion Alsobrook Stahlman and Her Family 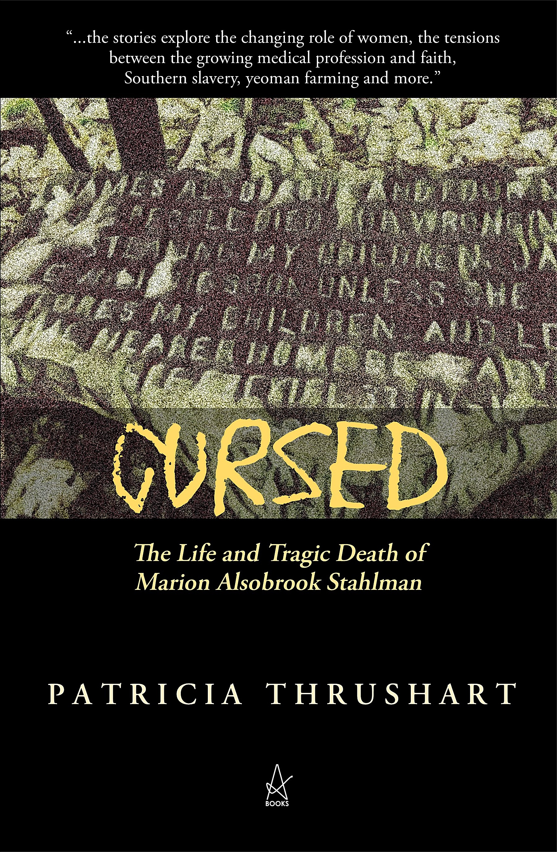 
New York, NY – ADELAIDE BOOKS is proud to present the latest work by Patricia Thrushart - Cursed: The Story of Marion Alsobrook Stahlman and Her Family

When young Marion Alsobrook Stahlman is stricken with puerperal fever after giving birth to her second son, her husband Douglas is hundreds of miles away, working for a cult that advocates faith healing over medicine. He returns to her side in February of 1901 and makes a series of draconian decisions that lead to her death, with the national press eagerly reporting on every aspect of the controversy. Douglas is found insane by a hastily assembled commission, but is released into the care of his mother. After a failed attempt to gain custody of his two sons, he carves an ominous curse of the Alsobrook family in a large boulder in the woods of Northwestern Pennsylvania. He never sees his children again.

Who was Marion Alsobrook Stahlman, the center of this tragedy? How did she come to be the focus of intense press coverage and the subject of protests outside her sickroom window? Who were the family members that gathered at her bedside in Valparaiso, Indiana, and spirited her boys away? Author Patricia Thrushart has spent years meticulously researching Marion’s family saga, from her ancestor landing in Jamestown in 1609 to the death of her youngest son in 1962. Throughout, Thrushart tells stories that reflect the sweeping course of American history, including colonial life, the Revolution, the migration of settlers westward, the Civil War and the urbanization of the United States. Using a combination of narrative nonfiction and fictional vignettes, the stories explore the changing role of women, the tensions between the growing medical profession and faith, Southern slavery, yeoman farming and more. The story culminates with the dramatic and heart-wrenching tale of Marion’s death— a death that will haunt the reader long after the last chapter is read.


Patricia Thrushart is an award-winning poet and writer living in the Appalachian region of Northwestern Pennsylvania. The author of multiple books of poetry, her work has appeared in many regional and national publications. In her narrative non-fiction, Patricia researches and then brings to life undiscovered historical women whose stories illuminate issues still prevalent today.


Title: Cursed: The Story of Marion Alsobrook Stahlman and Her Family

Description of the company: ADELAIDE BOOKS LLC is a New York based independent company dedicated to publishing literary fiction and creative nonfiction. It was founded in July 2017 as an imprint of the Adelaide Literary Magazine, with the aim to facilitate publishing of novels, memoirs, and collections of short stories, poems, and essays by contributing authors of our magazine and other qualified writers.We believe that in doing so, we best fulfill the mission outlined in Adelaide Magazine – “to promote writers we publish, helping both new and emerging, and established authors reaching a wider literary audience.”

Our motto is: We don’t publish classics, we make classics.