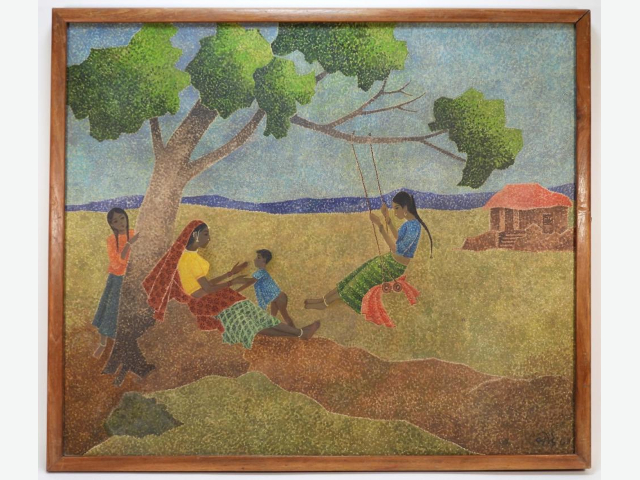 There will be no live in-gallery bidding for the sale, which features 300 lots from prominent estates and collections. “This auction has a well-rounded group of interesting items from New England estates,” said Kevin Bruneau, Bruneau & Co’s president and an auctioneer. “A wonderful selection of Indian paintings will be led by modern artist Narayan Shridhar Bendre.”

The Bendre work is an oil on canvas outdoor genre painting depicting a girl on a tree swing with another seated at the base of the trunk looking after two young children. The painting, nicely housed in a 31 ¼ inch by 36 ¾ inch frame, is artist signed lower right and should gavel for $40,000-$50,000. It’s a fine example from a revered landscape artist.

Bendre originally studied at the State Art School before getting his Government Diploma in Art in Mumbai. He followed the Indore School and received a Silver Medal of Art from the Bombay Art Society in 1934, followed by a Gold Medal in 1941. Bendre taught at the Baroda's Faculty of Fine Arts and was a member of the Progressive Artists Group.

“We’re excited to have another Ludwig Bemelmans come through the gallery, as I am a fan of his illustration,” said Travis Landry, a Bruneau & Co. auctioneer and the firm’s Director of Pop Culture. The gouache on board depicts Paris on a snowy, windswept night. It’s signed lower right (“Bemelmans”) and is 15 ½ inches by 15 inches (sight) (est. $8,000-$12,000).

Author and illustrator Ludwig Bemelmans was born in Austria and emigrated to the United States before the start of World War I. He dreamed of becoming a cartoonist and left a lasting impact on children’s literature with his whimsical drawing style. He is best known as the creator of Madeline, a series of children’s books about a Parisian schoolgirl, first published in 1939.

The oil on canvas farm landscape by Joseph Farquharson is 20 ¼ inches by 29 ¾ inches and depicts a woman and her dog standing in the middle of a winding dirt road leading towards a cattle field beside a small home. The work is signed “J Farquharson” lower right and should fetch $8,000-$12,000. Farquharson frequently included a human figure in his work to demonstrate the scale, and sometimes the severity, of the surrounding landscapes.

Farquharson studied at the Edinburgh Trustees' Academy in Scotland under Peter Graham before going to Paris to spend his time in Carolus-Duran's studio, where he befriended John Singer Sargeant. He is most famous for his snowy winter landscapes, usually featuring sheep or other animals and often at dawn or dusk. He was nicknamed “The Painting Laird”.

A ceramic face plaque by Pablo Picasso (Spain, 1881-1973) for Madoura, titled Jacqueline’s Profile (after Picasso’s second wife, Jacqueline Roque) has an estimate of $2,500-$4,000. It’s 7 ¾ inches in diameter and depicts a feminine profile in a white glaze over deep brown, and is marked “"Madoura Empreinte Originale de Picasso" on verso.

A seven-piece modern Italian burl veneer dining set, made in the 20th century, costing over $6,000 new, is estimated to bring $800-$1,200. The set boasts a rectangular figured burl wood center with a string inlay border top with two leaves over a shapely column base and six chairs upholstered with black fabric made by Excelsior Furniture in Italy.

A pair of Chinese carved wood figures from the late Ming or early Qing Dynasty should change hands for $500-$800. The figures, one 5 ¾ inches tall and the other 8 inches tall, consist of a carved Guan-Yin dressed in a flowing robe carrying a bowl and holding a single peach, and a figure dressed in flowing robes with one hand touching the ground.

An early 20th century Japanese cloisonné footed box made from metal and enamel should finish at $200-$300. The polychromatic avian and botanical decorated box with rich cobalt blue hues is supported by six feet, with an engraved gilt interior. It was acquired from the George Yamaoka estate, currently from the collection of a Rumford, R.I. estate.

Internet bidding will be facilitated by LiveAuctioneers.com, Invaluable.com, Bidsquare.com, bidLIVE.Bruneauandco.com and the mobile app “Bruneau & Co.” on iTunes or GooglePlay.