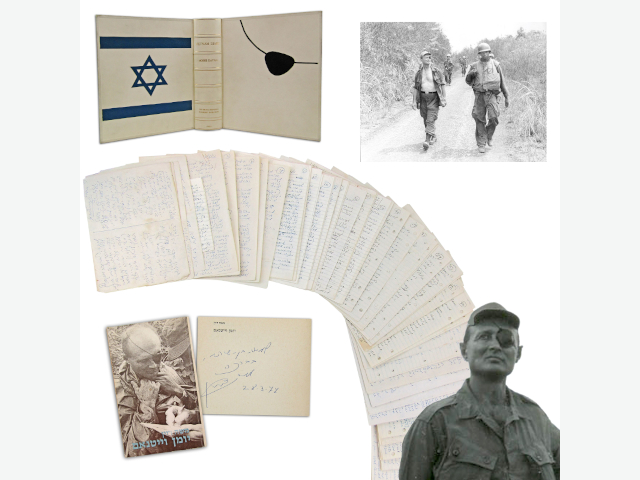 
Wilton, CT, USA, March 15, 2022 -- A 197-page book manuscript written entirely in the hand of Israeli military commander and statesman Moshe Dayan, two items pertaining to Albert Einstein (a photograph and a manuscript), an autograph letter signed by Robert E. Lee and a document boldly signed by John Adams in 1801 are just a few of the expected highlights in University Archives’ online-only auction planned for Wednesday, March 30th, starting promptly at 10:30 am Eastern time.

The Rare Autographs, Manuscripts, Photographs & Books auction features historical material from multiple collecting categories. The catalog, with all 417 lots, is up for viewing and bidding now, on the University Archives website (www.UniversityArchives.com), plus the platforms LiveAuctioneers.com, Invaluable.com and Auctionzip.com. Phone and absentee bids accepted.

In 1966, Moshe Dayan spent a month embedded with U.S. forces in Vietnam. His often-critical observations of American military tactics were later published in his Vietnam Diary. A portion of his original manuscript -- 197 pages in Hebrew with some words in English -- is offered in a fine clamshell case, with a signed first edition copy of the published book (est. $60,000-$80,000).

An Albert Einstein manuscript in German from around 1942 is paired with a vintage Lotte Jacobi photograph of the physicist wearing his beloved bomber jacket. The manuscript, containing 91 words and 13 lines of mathematical calculations, relates to covariant bivectors, in what marked one of Einstein’s final attempts at articulating his Unified Field Theory (est. $27,500-$30,000).

A one-page letter written and signed by Robert E. Lee (as “R. E. Lee”) in Petersburg, Virginia, dated Nov. 14, 1864, is addressed to Mr. (Thomas Lee) Shippen. In it, Lee politely declines Mr. Shippen’s offer to continue to use Violet Bank for winter quarters, where Lee had resided since June 1864. Lee’s decision was prompted by fear that the exhausted Confederate troops would desert en masse if he didn’t personally encamp with them (est. $6,000-$7,000).

There are over 100 items relating to U.S. Presidents. One is the John Adams signed document dated January 27, 1801, promoting an artillery engineer. This military document features an unusually large Adams signature measuring nearly 3 inches by 1 inch. Adams had recently been defeated by Thomas Jefferson during the famous “Revolution of 1800” (est. $5,000-$6,000).

Part of the sheet from Abraham Lincoln’s death bed removed from the Peterson Boarding House, a blood-stained linen swatch measuring .625 inches by .25 inches, CAG encapsulated and with provenance from American diplomat Charles K. Tuckerman, has an estimate of $2,000-$3,000.