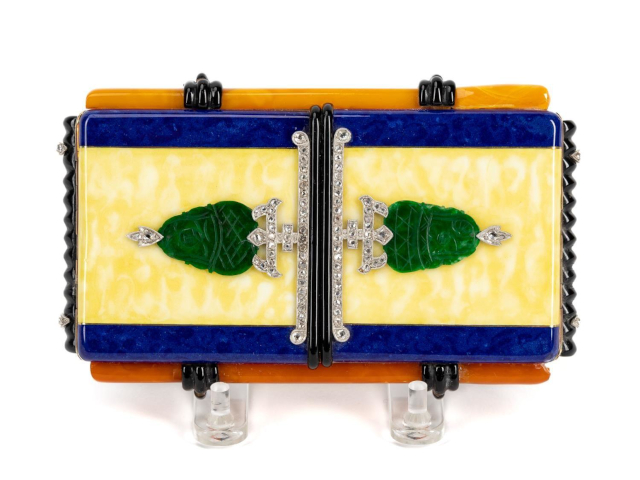 
Atlanta, GA, USA, March 11, 2022 -- A vintage platinum and diamond anniversary ring given by the late Coca-Cola president Robert W. Woodruff (1889-1985) to his wife Nell, and Mrs. Woodruff’s custom Art Deco platinum and diamond bracelet, combined to bring $231,750 in an online-only sale of items from the Woodruff estate held Saturday, February 26th, by Ahlers & Ogletree, based in Atlanta.

Mr. Woodruff was a world-renowned American businessman and philanthropist who served as president of The Coca-Cola Company from 1923 to 1955. Nell had been a Red Cross nurse. The auction featured over 400 lots and included a portrait of Mr. Woodruff by Norman Rockwell and a portrait of George Washington by Dwight D. Eisenhower, a longtime friend of the Woodruffs.

Also offered were items pertaining to Woodruff’s longtime friendship with legendary golfer Bobby Jones (including a birthday letter from Bobby Jones and Eisenhower to Woodruff, plus golfing books written by Jones and inscribed “to Bob”); items relating to cigars and pipes, two of Woodruff’s passions; and many rarities, including Coca-Cola items belonging to Mr. Woodruff.

Following are additional highlights from the auction, which grossed about $1.1 million and attracted over 1,700 registered online bidders, who participated through LiveAuctioneers.com, Bidsquare.com and Invaluable.com. There were also 437 phone bidders. All prices quoted include a 25 percent buyer’s premium.

The oil on canvas Portrait of George Washington after Gilbert Stuart (Mass./ 1755-1828) by former President Eisenhower (with whom Mr. Woodruff often played golf) was housed in a giltwood frame measuring 35 ½ inches by 29 ½ inches. It was signed lower right with a plaque reading, “To Nell and Bob from their friend Ike.” The portrait found a new owner for $50,000.

The Woodruffs led a full, exciting life, and the items in the auction reflected that zest for living. They were pulled from the couple’s four homes: Windcrofte, their opulent primary residence on 16 acres of prime real estate in Atlanta; the TE Ranch in Wyoming, the 8,000-acre onetime home of the legendary Buffalo Bill Cody (1846-1917); a two-story River House complex on 52nd Street in Manhattan; and Ichauway, a vast, 29,000-acre working-hunting plantation in South Georgia.

A set of eleven Lenox (American, 20th century) porcelain plates, custom-made for the Woodruffs and depicting various figural and landscape images at the Ichauway plantation, each plate marked and with different dedications on verso, fetched $53,125. Also, a complete set of 44 Christmas cards produced from 1941-1984 for the Woodruffs by Athos Menaboni (Italian/Ga., 1895-1990), depicting birds and flora from the TE Ranch and Ichauway, gaveled for $25,000.

A first half 20th century Tiffany & Company 18kt yellow gold traveling spoon with two bowls and a folding body, inscribed “1885-1935 From Nell” and monogrammed “EWW”, in a leather case and with a maker’s mark, changed hands for $4,062. Mr. Woodruff’s Coke collectibles included two advertising lighters, consisting of a Hadson “Blue Bird” musical lighter (with Woodruff’s initials), and a Scripto Vu-Lighter with his name, sold as a single lot for $3,438.

Ahlers & Ogletree’s next major event will be a Spring Estates & Collections Auction on April 9th and 10th. To learn more about Ahlers & Ogletree, or to join their email list for info on upcoming sales, please visit www.aandoauctions.com. Updates are posted often. You can also follow Ahlers & Ogletree through social media on Twitter, Instagram, Pinterest and Facebook.