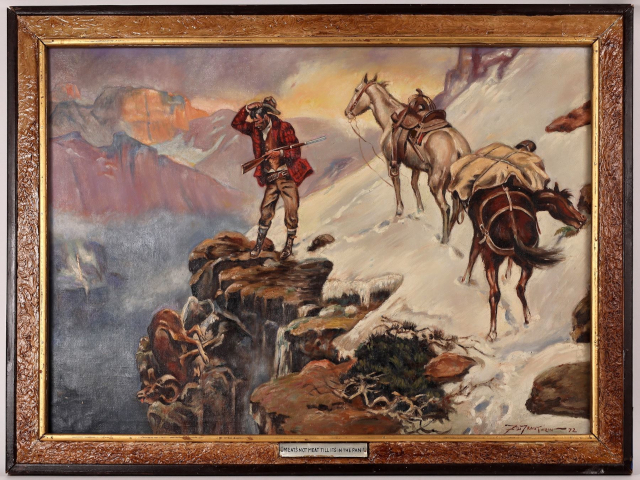 Following are highlights from the auction. Online bidding was facilitated by iCollector.com, LiveAuctioneers.com, Invaluable.com and Auctionzip.com. Prices include the buyer’s premium.

Day 1 highlights included a lot of five publications relating to Philippines travel ephemera, all from the first half of the 20th century, an example being a rare official program for the Philippine Carnival held in Manila in 1910, 80 pages ($10,938); and an archive of about 400 photographs of San Francisco and the Northern Redwood Corridor, taken circa 1932-1935 by photographer Russell William Angel, including many shots of California’s majestic redwood trees ($3,000).

Also sold on Day 1 was a rare and large Staffordshire blue and white ironstone transfer foot bath and pitcher set made by an unknown craftsman, the pitcher 13 ½ inches tall ($2,625); a group of six antique bitters bottles, from various locales, to include Philadelphia, South Redding (Mass.), Richmond (Va.) and Toronto, Canada ($875); and an Independent Oil ceramic enameled sign in red, white and black (“From Coast to Coast – Independent Oil”) with each side 27 inches ($875).

Day 2, on Friday, February 25th, was a busy one, featuring stocks and bonds (in the categories of mining, railroad, transportation and miscellaneous); and numismatics (to include currency, scrip and ephemera; ingots and bullion; coins, medals and tokens). More than 625 lots were offered.

Day 2 star lots included a San Francisco Mint silver ingot, .999 fine, weighing 6.61 oz. and showing the old style, pre-World War II logo of the Mint of San Francisco ($7,230); a men’s ring of one troy ounce of solid 14kt gold carefully holding a 1/3 Stater gold coin from the 6th century BC, one of the first of all world gold coins ($3,250); and a rare Hudson Bay Company 1820 one-pound sterling certificate, issued at York Factory and signed by two officials ($1,000).

Silver ingots, in addition to the one described, were popular with bidders. Examples included: