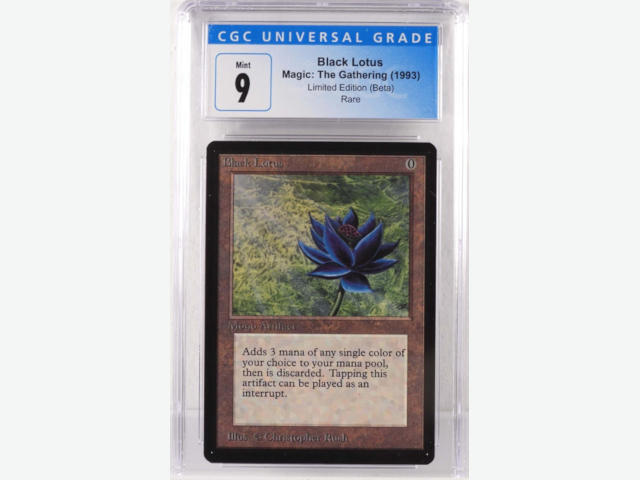 Soaring to the winner’s circle was a rare and highly desirable Magic: The Gathering Beta Black Lotus card, graded CGC 9 Mint, a Holy Grail item for MTG collectors. It sold within estimate for $45,000. The card is revered as the most powerful of the Power Nine and is idolized for its fast mana acceleration during play. It’s also famous for the elegant artwork by Christopher Rush.

“It was a phenomenal sale, and an absolute pleasure to get to handle such a wonderful collection of Magic: The Gathering cards” said Travis Landry, a Bruneau & Co. auctioneer and the firm’s Director of Pop Culture. “Original Alpha and Beta cards do not come out of the woodwork that often ungraded, especially Power Nine. It was certainly a Trading Card Game dominated day.”

All the CGC graded MTG cards in the auction were from an original owner Virginia collection. The runner up card was a Magic: The Gathering Alpha Ancestral Recall card, graded CGC 9.5 Gem Mint ($38,750). Like the Beta Black Lotus, it’s another MTG Holy Grail card, on most every collector's wish list to complete, with Alpha print being the most coveted.

Next in line was a Magic: The Gathering Alpha Timetwister trading card, graded BGS 8.5 NM-MT+. It bested its high estimate by finishing at $16,250. When played with the other cards of the Power Nine, Timetwister becomes a powerful tool. As an Alpha print BGS 8.5 example, this card is a wise investment for the serious collector’s MTG portfolio.

In fourth place was a Magic: The Gathering Beta Mox Sapphire trading card, graded CGC 9.5 Gem Mint, which sold within estimate for $14,375. The Mox gem artifact cards are an incredibly powerful set, rightfully earning their place in the Power Nine. This Mox Sapphire, a CGC 9.5 Beta print example, was one of the finest ones on the open market.

Rounding out the top five was a Magic: The Gathering Beta Volcanic Island trading card, graded CGC 7 Near Mint. Volcanic Island is iconic in MTG lore, not only for being a dual land but exclusive to the Beta printing. The example in the auction proved to be something of a sleeper, sailing past its $5,000 high estimate to change hands for $9,375.

“This was yet another auction proving that investing in Pop Culture collectibles such as comics and cards is a real addition to one’s financial portfolio,” said Kevin Bruneau, Bruneau & Co’s president and an auctioneer. “The strength of the market reminds me of antiques twenty years ago.” The auction was packed with 427 lots curated from collections and estates across the U.S.

Following are additional highlights from the auction. Internet bidding was facilitated by the popular online platforms LiveAuctioneers.com, Invaluable.com and Bidsquare.com, as well as bidLIVE.Bruneauandco.com and the mobile app ‘Bruneau & Co.’ on iTunes or GooglePlay. Phone and absentee bids were also accepted. All prices quoted include the buyer’s premium.

One lot consisting of eight factory-sealed 1999 Pokémon Base Unlimited Booster Pack cards in three-pack clamshells, for a total of 24 packs with eight of each pack artwork, realized $8,438. Some clamshells were yellowed from aging and sun, otherwise good condition. These are a unique piece of Pokémon TCG history and would have been sold in a department store.