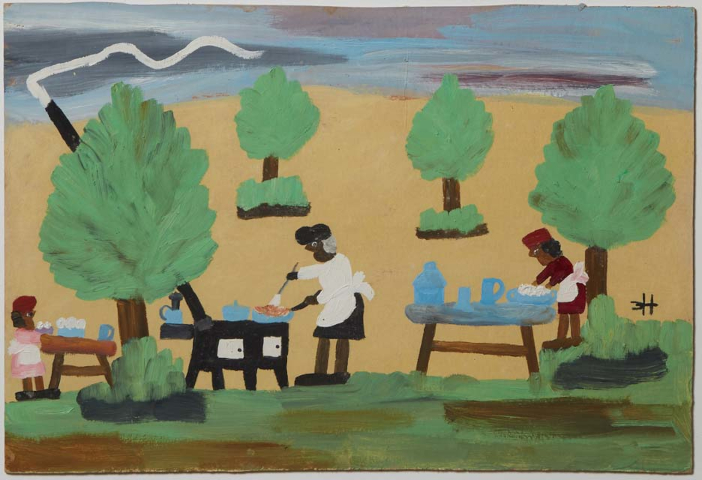 The auction will be held online and in the gallery at 1330 Saint Charles Avenue in New Orleans. Start times are 10 am Central time both days. More than 900 lots will come up for bid over the two days, in categories that include French period furniture, original works of art by noted local and regional artists, clocks, estate jewelry, couture items, silver, bronzes and decorative items.

The oil on board painting by Clementine Hunter (La., 1887-1987), titled Fish Fry, is a wonderful example of the artist’s work. The 16 inch by 24 inch work is signed lower right and is expected to bring $4,000-$8,000. Ms. Hunter was a self-taught artist who worked as a farm laborer when young and only began painting in her 50’s. She sold her first paintings for as little as 25 cents.

Internet bidding will be provided by LiveAuctioneers.com, Invaluable.com and BidSquare.com. Absentee and phone bids will be accepted until 1 pm Central time the day before the auction. A 25 percent buyer’s premium will be applied in-house (three percent discount for cash or check). A printed catalog is available; call 504-529-5057 or email info@crescentcityauctiongallery.com.

For more regarding Crescent City Auction Gallery and the Important Spring Estates Auction scheduled for the weekend of March 18th and 19th, visit www.crescentcityauctiongallery.com.