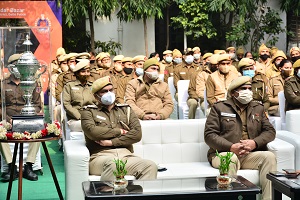 
Mumbai, 21st January 2022: MX Player’s recently launched series Bhaukaal 2, which is inspired by the life of IPS officer Navniet Sekera, has taken the nation by storm with its gripping narrative and splendid performances. It\'s successful opening has not only won over audiences but in a unique initiative, MX Player has associated with the Delhi Police from the historic Sadar Bazaar Police Station, one of the oldest police stations in India that was established in Delhi in 1861 and was also assessed as the best police station in the country in 2021. Lead actor, Mohit Raina, who enacts the role of the real-life Singham – Navniet Sekera, salutes the tireless efforts of the men in khaki who have been selflessly serving the nation, especially during this global pandemic.

Bhaukaal 2\'s portrayal of real-life crime incidents and the struggles and sacrifices of a police officer has made it one of the best shows in the crime-thriller genre. MX Player has recently delivered several record-breaking shows across genres like Aashram, Matsya Kaand, High, Samantar and Campus Diaries that dominate the Indian and global OTT platforms and this series has already ranked amongst the top three shows on the platform. This is a testament to the brands commitment of understanding the entertainment needs and bringing quality content to its viewers.

We rarely acknowledge the sacrifices that police officers make for us. Whether it’s working planned shifts or being called into duty for emergency responses, they do it all so humbly and place their duty above all else for the safety of others and to work towards ensuring a crime free city where its citizens feel secure. As an ode to the officers in the line of duty and as an industry first initiative, MX Player organized an engaging and interactive Virtual Meet & Greet event with Mohit Raina and 75 officers across ranks from the Sadar Bazaar Police Station in New Delhi and others who joined in from various cities across India.

Mohit Raina, who was been lauded for his role as S.S.P Naveen Sikhera, spoke about his character in the series as he enacted the efforts of the police to control the lawlessness in Muzaffarnagar in 2003. He bowled over the officers with his humble tribute that spoke about understanding the sacrifice and efforts that the officers make to keep us and the country safe.

This unique and momentous event was also streamed LIVE for numerous other officers and media across nearly 20 cities in India and it was a truly memorable day for the heroes of our nation as they received the much-deserved respect and honor on behalf of the entire country.

Speaking about this event that honors the IPS brave hearts, Mohit Raina said, “I am proud to be a part of one of the finest and most successful crime series on the web. I\'m truly overwhelmed by the love that the audiences are showering on us. Being given an opportunity to work closely with IPS officer Navniet Sekera for this role, I realised the amount of effort that goes behind the scenes to keep us and our country safe. Through this first of a kind virtual event, we wanted to thank our officers for their selfless services and acknowledge how they work relentlessly for the nation and the sacrifices they make in the line of duty. They’re the true superheroes of the country and the entire team of Bhaukaal salutes their bravery.”

Speaking on the same, Shri Sagar Singh Kalsi - DCP North of Delhi Police said, “We feel truly honoured on receiving such respect and warmth. We\'re delighted to co-host the launch at PS Sadar Bazaar, one of the oldest PS of India that was judged the Best Police Station in the country. This virtual launch is ideally located to honour our real heroes who toil on the ground. We are associating with MX Player for this event and the interaction with actor Mohit Raina who has so convincingly portrayed the role of one of our very own true soldiers has been rewarding. Shows like Bhaukaal go a long way in inspiring the youth to join the police forces while highlighting the hard work we put in along the line of duty. We stay committed to work for the welfare of the public, putting our service before ourselves always.”

Bhaukaal 2 is a 10-episodic-web-series inspired by the life of IPS officer Navniet Sekera that sees Mohit Raina as the heroic S.S.P Naveen Sikhera, who puts service before self and brings alive the story of Muzaffarnagar, UP and its saga of lawlessness in 2003. Produced by Applause Entertainment in association with Baweja Studios Production, MX Original Series Bhaukaal 2 is directed by Jatin Wagle and also stars Bidita Bag, Siddhanth Kapoor, Pradeep Nagar, Gulki Joshi, Ajay Chaudhary, Rashmi Rajput and Late Major Bikramjeet Kanwarpal in pivotal roles.

MX Player is an entertainment super app that caters to over 280 million Monthly Active users in India, integrating all forms of entertainment on one platform – including video playback, streaming video, music and gaming. Defining “everytainment” for viewers with entertainment that suits every mood, it currently operates on an ad supported model and hosts a wide library of over 2,00,000 hrs. of premium content across 10 languages, including a critically acclaimed slate of MX Original/ Exclusives, movies, web series, TV shows, news and audio music. The app is available across Android, iOS, Web, Amazon Fire TV Stick, Android TV and OnePlus TV amongst others.

Having launched its gaming feature in February 2020, Games on MX Player has grown exponentially, and this tournament style slew of hyper casual mobile games is now available across its Android and iOS apps. MX Player has now spread its footprints across 13 markets including UAE, US, Canada, UK, Australia, New Zealand, Bangladesh, Nepal, Afghanistan, Sri Lanka, Maldives, Nigeria and Bhutan. MX has further expanded its business with the launch of its short format video app MX TakaTak - a home-grown platform that offers a wide variety of short form content and creation tools across genres that is home to the largest number of 48Mn+ unique content creators as well as MX ShareKaro that is an easy-to-use file sharing app with rapid transfer speed.

Hire an expert to write a paper for you at writers per hour.
Buy 100% high-quality replica watches with a 2-year warranty and free ground shipping!
Get your Explainer Video at 100 dollars only Today.