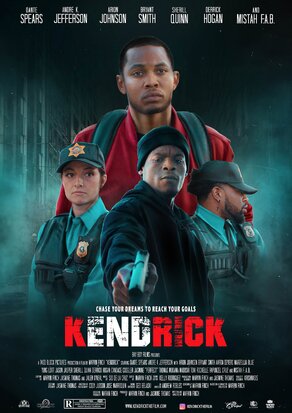 Kendrick is the story of an aspiring and up-and-coming hip-hop artist who runs into a powerful man that can help him achieve his dreams, but he must rely on old and dangerous friendships to be able to meet the deadline and achieve success.

Dante Spears stars in this movie, as a follow-up to his smash-hit On The Run. This is a young artist and street performer who gets offered the opportunity of a lifetime when a music executive sees him perform, but he needs a demo to fulfill the executive’s proposal. For this, he records his music overnight at Tony’s studio, while making a plan on how to make money to pay for the studio time, he runs into an old friend that’s fresh out of jail, Rico. And Rico proposes a robbery, Kendrick accepts, but when the day comes and the hit happens, it goes awry.

Producer Marvin T. Finch said, "Teaming up with like-minded individuals allowed us to complete this film through its many challenges of producing my first film. His background in video production allowed him to produce a good quality product for the Bay Area and bring it to the world to feel a part of the same experiences of life in Oakland, California.

Critics say Kendrick is a high-energy, high-action film that has a lot of emotions. Overall great story.