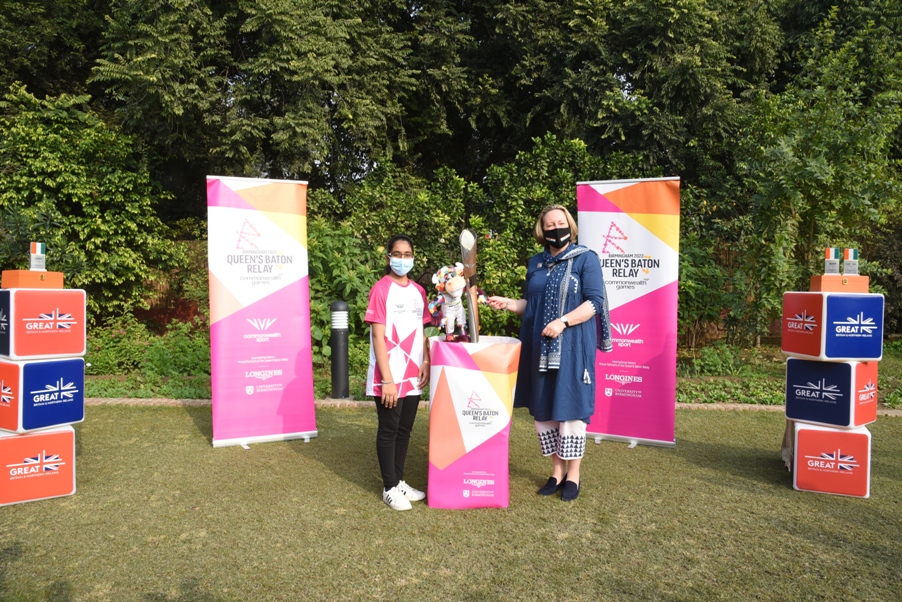 The University is an official partner of the Queen’s Baton Relay and selected 15-year-old Vinisha as its Batonbearer in India. Vinisha previously spoke at COP26, shortlisted for the Earthshot prize for her solar ironing cart invention, which uses solar panels to eliminate the need for street vendors to use polluting coal for ironing.

Talking about the honour, Vinisha said: “Being the University of Birmingham’s Batonbearer in India is fantastic and I’d like to thank the University for this awesome opportunity. The University’s scientists are really inspirational – they are living my dream of finding solutions to the big challenges that we face. I like the way the experts at the University of Birmingham work with partners in India forming this unique living bridge of UK-India experts in fields like surgical hygiene, environmental pollution and sustainable cooling – fields of research that can help improve people’s lives.”.

University of Birmingham experts are leading a series of high-profile events exploring how researchers can help to solve global challenges affecting the people of India. The events celebrate the Baton’s arrival in India.

In India, the events feature a range of top British and Indian experts, and cover areas such as Future of Work, Gender Equality, Women in STEMM, Sports Science for Performance amongst others. These events will be underpinned by Commonwealth-wide celebrations for staff, students and alumni and campaign #gamechangingbirmingham.

Through its India Institute, the University of Birmingham works with partners across India to deliver impact in areas such as surgical hygiene, environmental pollution, sustainable cooling and applied sports science. It is also creating new education initiatives, notably a partnership with the National Rail Training Institute (NRTI) to train India’s future railway experts.

The University’s environmental scientists have helped create a hi-tech ‘heart’ for the Queen’s Baton, which contains atmospheric sensors with laser technology that analyses the environmental conditions wherever it is in the world. Augmented Reality (AR) will be used to visualise creatively data captured throughout the journey to invite conversations around air quality across the Commonwealth.

Data collected on the Baton’s journey will contribute to ongoing research projects being conducted across the globe by a team led by atmospheric scientist Professor Francis Pope who said, “Atmospheric data captured during the Baton’s global journey will be highly valuable in starting important conversations around air quality across the Commonwealth. We have several air quality research programmes in India and look forward to receiving data from the Baton during its time in country.”