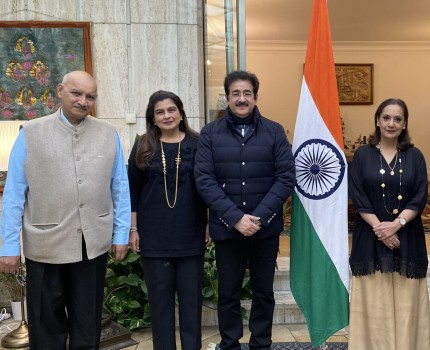 
Berne: Renowned media personality of India Dr. Sandeep Marwah President of Marwah Studios and Chancellor AAFT University of Media and Arts was invited by H.E. Monika Kapil Mohta Ambassador of India to Switzerland on his official visit to Zurich on the celebration of Bharat Mahotsav- 75 Years of India’s Independence.

Dr. Sandeep Marwah informed Ambassador about the first film University of the country under the name and banner of AAFT University of Media and Arts at Raipur India and offered Scholarship to the deserving student from Switzerland to learn in India. He also showed interest to collaborate with schools of Hospitality and tourism from Switzerland.

Dr. Marwah extended his ideas of opening an Indo Swiss Film and Cultural Forum under the established International Chamber of Media and Entertainment Industry to develop and promote relation between two countries through art and culture. H.E. Monika Mohta also gave many new ideas related to films, television and media industry which can be part and parcel of this forum. Dr. Madhup Mohta, Reena Marwah, Mahendrasinh C Jadeja and Amar Kavi were also present there.

There is no better press release writing company as 123 term papers.
Learn about online entrepreneurship at JohannesLarsson.com
Buy 100% high-quality replica watches with a 2-year warranty and free ground shipping!
To ensure stability and reachability of your applications at all times, remote DDoS protection can keep your hosting services online