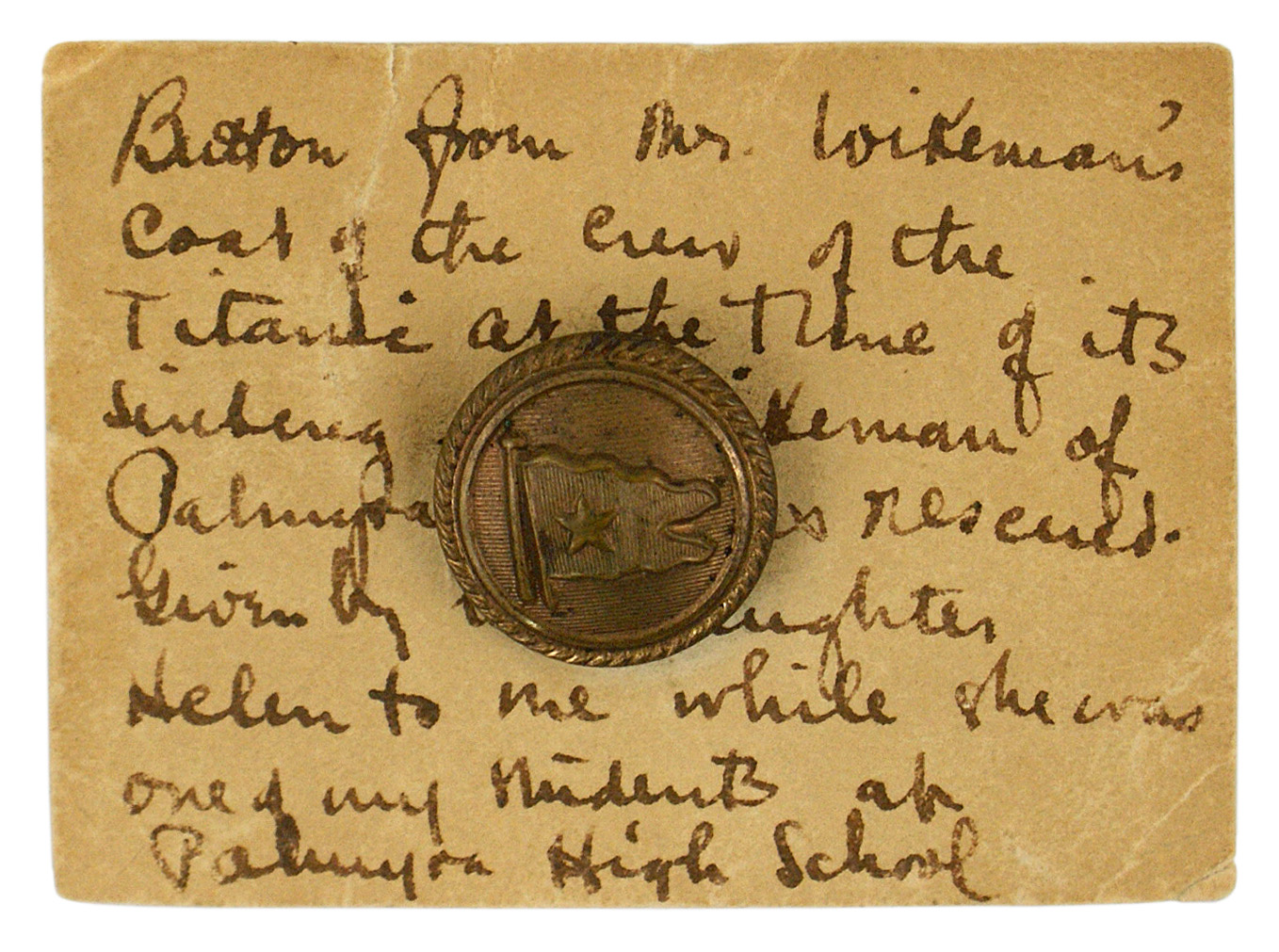 
Bouckville, NY, USA, November 10, 2021 -- A White Star Line button worn by one of two barbers on board the Titanic (who survived the disaster), plus a trove of items pertaining to the renowned American naval officer, aviator and polar explorer Rear Admiral Richard E. Byrd are expected highlights in Mohawk Arms’ Militaria Auction #86, an Internet and gallery auction slated for December 18th.

Auction #86 is brimming with hundreds of items spanning multiple conflicts and generations, online and live in the gallery on Route 20 in Bouckville, in upstate New York. The full catalog will be up soon, at www.MilitaryRelics.com, plus LiveAuctioneers.com and Invaluable.com. New items continue to pour in, like an American colonial Rev War-era cannon, circa 1740-1780.

Charles Weikman was a chief barber on the ill-fated Titanic the night it struck an iceberg and sank in the icy waters of the North Atlantic Ocean the night of April 15, 1912. He stood on the deck of the ship as it sank, awaiting his fate, when suddenly the stern of the ship rose out of the water to a perpendicular position, tossing him and hundreds of others in to the chilly waters.

Weikman was able to grab onto some floating debris and went unconscious. When he came to, he was in a lifeboat, one of the lucky ones who survived. He was still wearing his barber coat, with the White Star Line button (which has been authenticated as period correct to 1910-1912). He gifted the button to his daughter, who later gave it to one of her teachers, a button collector.

The teacher subsequently sold her collection, along with the button, to another collector, in Pennsylvania. Her son, who inherited the collection, is the consignor. An aside: Mr. Weikman later served as a barber on the Lusitania. He resigned, however, in early 1915, after German submarines began to target ships in the Atlantic Ocean. In doing so, he avoided a second disaster.

The button is accompanied by a letter of authenticity from the consignor. He writes, “My mother, Sara, was a button collector and received the button from her friend, Miss Helen Martin, who was also a button collector for many years. This button is from Charles Weikman’s coat. Charles was…..one of the two barbers on the Titanic…… Miss Martin was given the button by Charles Weikman’s daughter, Helen, a student of Miss Martin’s at Palmyra High School” (New Jersey).

The letters, photos and ephemera from the personal possessions of Rear Admiral Byrd (1888-1957) are certain to appeal to collectors who recognize the achievements of a true American hero and recipient of the Congressional Medal of Honor. Byrd claimed that his expeditions were the first to reach both the North and South Pole by air. He also discovered the dormant Mount Sidley volcano in Antarctica. Included are original reels of films (including one from the North Pole).

Also up for bid is an incredible photo taken in April 1928 for the Boston Traveler newspaper, showing Byrd, holding a package of anti-pneumonia serum, flanked by aviation pioneer Charles Lindbergh, after the two landed in Quebec, Canada, from New York. Their mission: to save the life of Floyd Bennett, who was suffering from pneumonia. The serum didn’t work; Bennett died.

Mohawk Arms’ next big Internet and catalog auction after this one is planned for the spring of 2022, probably sometime in April. The company typically conducts two large sales annually. To learn more about Mohawk Arms, Inc., and the Internet and gallery auction planned for Saturday, Dec, 18th at 9:45 am EDT, visit www.MilitaryRelics.com.