Paintings by Saito and Kluge, Plus A Claude Conover Vessel, Top Estimates at Neue Auctions, Oct. 30 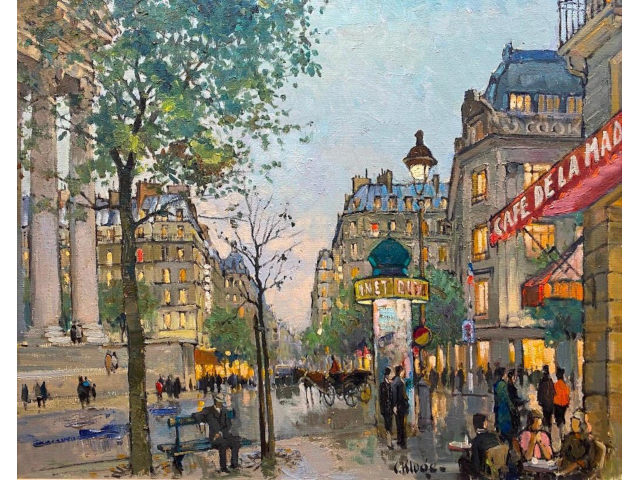 The Saito painting, titled Summer Ghost (1997) was the sale’s top lot, finishing at $14,760 against an estimate of $7,000-$10,000. The work, 50 inches by 57 ¾ inches (sight, less frame), was signed, titled and dated. Saito was an abstract painter with ties to the Color Field movement and Lyrical abstraction. His paintings infused saturated colorscapes with delicately drawn lines.

The very large Claude Conover “Milpa” stoneware vessel of ovoid shouldered form, having a circular mouth and signed to the base, 23 inches tall, soared past its $4,000-$6,000 estimate to bring $8,610. The large size of this structure makes one think about how Conover here stretches the limits of ceramic structure. Conover was educated locally, at the Cleveland Institute of Art.

Following are additional highlights from the auction. Internet bidding was facilitated by Liveauctioneers.com, Invaluable.com and Bidsquare.com. All prices quoted include a 23 percent buyer’s premium.”

A 19th century Khotan handwoven wool carpet, made in Eastern Turkestan, ended up being the third top lot of the auction, selling for $9,840, more even than the Conover vessel and topping its $3,000-$5,000 pre-sale estimate. The 22-foot by 11-foot-1-inch rug had a vase and pomegranate design on a vibrant blue field, the borders having floral scroll and medallion and cloud designs.

The sterling silver category was led by a large Tiffany & Company monteith, circa 1966, of oval form with a scalloped rim raised on baroque style scroll legs, weighing 109.37 oz. troy ($4,305); and an International sterling silver flatware service in the Royal Danish pattern, monogrammed and in vintage condition with normal wear from use, weighing about 159.82 oz. troy ($3,705).

Other silver lots featured a streamlined mid-century Japanese .950 silver tea service comprising a teapot, a coffee pot, a creamer and a covered sugar with impressed marks, weighing 67.48 oz. troy ($1,476); and a beautiful Gorham sterling silver flatware service for twelve, with all pieces monogrammed on the handles and properly marked, weighing about 145.83 troy oz. ($2,952).

Original oil paintings featured an oil on canvas marine work with ships by John Bentham-Dinsdale (British, 1927-2008), titled The Frolic and Wasp Off Bermuda (1,722); a group of four framed oils on canvas by Andre Michel (French, b. 1945), all Paris street scenes ($1,353); and a Continental School oil on canvas, Venus on a Dolphin with Cupids, nicely framed ($1,353).

There is no better press release writing company as 123 term papers.
To ensure stability and reachability of your applications at all times, remote DDoS protection can keep your hosting services online
Buy 100% high-quality replica watches with a 2-year warranty and free ground shipping!