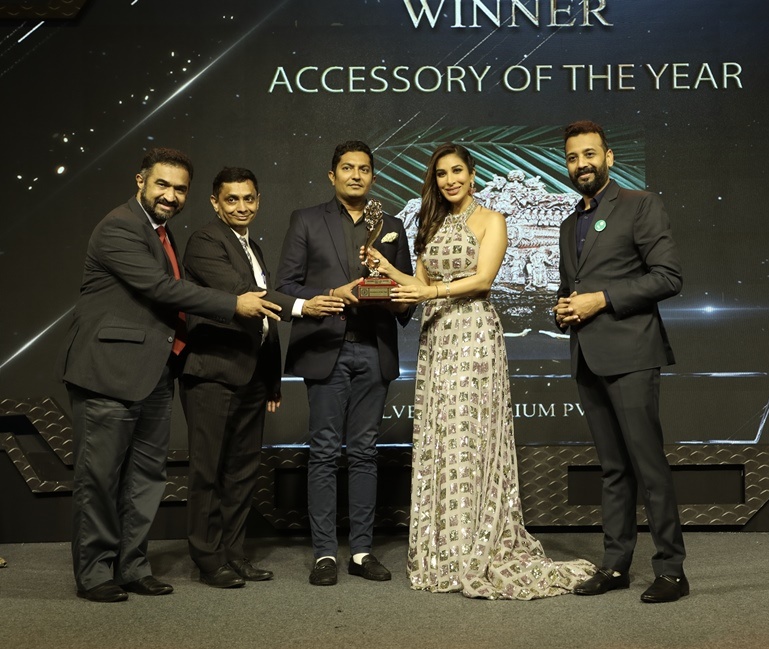 
22nd October 2021: The grand finale of industry\'s most prestigious awards National Jewellery Awards (NJA) 2020-21, an initiative by the All India Gem and Jewellery Domestic Council (GJC), the apex body for domestic jewellery sector, were held on a bigger and grander scale. The NJA 2020-21 attracted an overwhelming response with thousands of entries.

Mr. Ashish Pethe (Chairman, GJC), Mr. Nilesh Shobhawat (Convener-NJA), and various stalwarts from the jewellery industry were present at the grand event. Celebrity Chief Guest Bollywood actress Sangeeta Bijlani, an singer, host and actresses Sophie Choudry and Kimi Katkar a popular actress were present to felicitate the winners and the show was anchored by Indian television actor Hussain Kuwajerwala which was mesmerising and entertaining. The Audience which comprises of the artistic people from the gold, jewellery back ground indeed had an entertaining evening.

The three hour award function showcased and recognized the talent and craftsmanship in the gems and jewellery industry. Known for its stand for craft, devotion and motivation for the industry, NJA under the auspices of GJC is considered to be Industry\'s biggest and widest award show that recognizes all sector of the industry and offers a platform where true talent of the industry are appreciated and encourage to stimulate growth and creativity in the industry after tough time of pandemic.

Mr. Ashish Pethe, Chairman, GJC, said, “NJA 20-21 will stimulate growth and facilitate progress of the gem & jewellery industry to the next paradigm after the global pandemic. NJA nurtures creativity and honours innovation while showcasing the best-of-India. It inspires passion, craftsmanship and devotion to the art and science of ‘Make in India’ jewellery manufacturing and retailing. It attracts young talent for the industry and inspires them to prove their talent to their peers. NJA also brings India’s craftsmen and artisans to the centre-stage and honours their role and efforts in continuing the illustrious legacy of India’s jewellery business.”

Mr. Nilesh Shobhawat, Convener-NJA, GJC, said, “The 10th edition of the prestigious National Jewellery Awards comes at after a difficult time caused by the pandemic. NJA is one of the several prestigious initiatives by GJC encourages to motivate the industry and trade while they seek to increase business through tough times. NJA provides a platform for the talented and the persistent players in the gem and jewellery business to showcase and showcase their talent on a national platform.”

Ernst & Young (E&Y) is GJC’s process advisors to ensure that the awards are conducted in the most transparent way and the results are unbiased.

About GJC: All India Gem and Jewellery Domestic Council (GJC) represents lakhs of trade constituents comprising manufacturers, wholesalers, retailers, distributors, laboratories, gemologists, designers and allied services to the domestic gems & jewellery industry. The Council functions with the objective to address the industry, its functioning, and its cause with a 360° approach to promote and progress its growth, while protecting the industry\'s interests. GJC, since the last 15 years, has been serving as a bridge between the government and the trade by undertaking various initiatives on behalf of and for the industry.