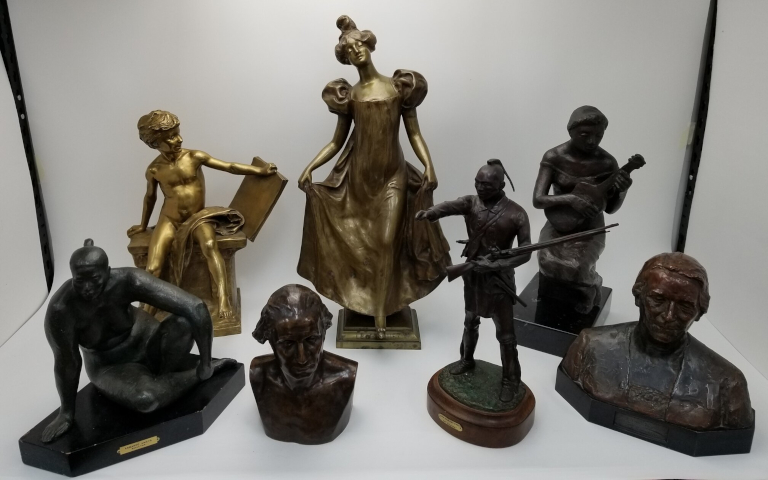 
The auction, packed with 700 lots, could be one of the company’s best ones ever. It will be held online and live in the East Meadow, N.Y. gallery (but with limited seating).

The auction will be held online and live in the World Auction Gallery showroom, located at 228 East Meadow Avenue in East Meadow, a hamlet in the town of Hempstead on Long Island, about 30 miles outside of Manhattan. The in-person auction, however, will be limited to ten people and must be booked at least a day in advance. To book a reservation, call 516-307-8180.

“This promises to be one of our best auctions ever and includes items from various New York City, Long Island, New Jersey and Connecticut estates,” said Ben Nejat, the owner of World Auction Gallery. “People can bid online through LiveAuctioneers.com, Invaluable.com or our website, www.worldauctiongallery.com. Telephone and absentee bids will also be accepted.”

The original artwork category will be highlighted by an exceptional and very large painting of Napoleon at the End of the Battle of Waterloo by Lemmo Rossi Scotti (Italian, 1848-1926). Scotti is best known for painting battle scenes in a late-Romantic style. His grandiose military depictions garnered him commissions from the Royal family, which gave him the title of Count.

Another monumental painting is by a follower of Guido Reni (Italian, 1575-1642), an artist of the Baroque period, although his works displayed a classical manner. The painting up for bid reflects his influence and style. Reni painted primarily religious works, but also mythological and allegorical subjects. He was famous as the predominant figure in the Bolognese School.

There are two large bronze sculptures in the auction, one by the Russian-born French artist and designer known as Erté (real name, Romain de Tirtoff, 1892-1990). He was a 20th-century artist and designer in an array of fields, including fashion, jewelry, graphic arts, costume design and set design for film, theater and opera, and interior décor. Works by Erté are highly collectible.

The other is by the American sculptor Dennis Smith (b. 1942). Smith is a Latter-day Saint and some of his artwork deals with LDS themes. He is known in LDS circles for creating most of the statues that form the Monument to Women Memorial Garden in Nauvoo, Ill. While on an LDS mission to Denmark in the 1960s, he was accepted into the Royal Danish Academy of Fine Arts.

Asian objects include a large, 25-inch-tall Japanese Ginbari enameled vase, made by Ando. Ginbari is a Japanese technique that uses silver foil in relief under the enamel. Cloisons are attached to the sheet and filled with colored glaze. Ando is a company located in Sakae, Nagoya, in central Japan. It’s is one of the very few traditional cloisonné companies still left in Japan.

Porcelain and glass treats will be offered in abundance and include a large and exceptional Art Nouveau Royal Vienna porcelain rotating covered urn; a large and lovely Livio Seguso Murano Italian glass sculpture; and a large and beautiful Galle internally decorated cameo glass lamp. There are many more examples to choose from; refer to the online catalog to view all the lots.