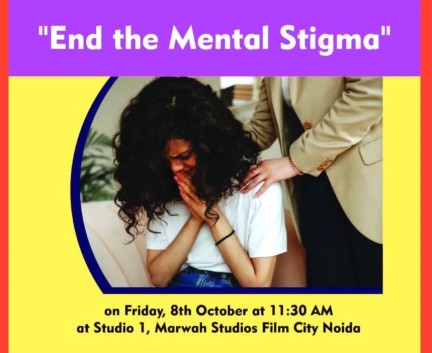 
Noida: A short film has been released today by Marwah Films and Video Production on mental health titled “End of The Mental Stigma” in a small function in association with AAFT School of Health and Wellness at Noida Film City two days before the World Mental Health Day.

“When you start expecting too much from others and from your own self it starts giving restlessness and then mental strain which slowly starts hurting your mental health. Spoken words, behavior of others, demand and supply of good and services, love affairs, wrong notions about your loved ones, fear of not achieving are many other reasons which all have disturbed the stable mind,” said Sandeep Marwah President of Marwah Studios initiating the dialogue in a session planned during film release.

“Control on your emotions, meditation, consultation when needed, keeping mind busy with creative activities, if need then medical checkups are the remedies required now and then for a disturbed person,” added Shivani Thapliyal also the concept writer and director of the film.

The session was followed by sharing experience by the students of AAFT School of Health and wellness. The questions were answered by the compete research team consisting of Sandeep Marwah, Sushil Bharti, Shivani Thapliyal and others.

Ged Online
To ensure stability and reachability of your applications at all times, remote DDoS protection can keep your hosting services online
Learn about online entrepreneurship at JohannesLarsson.com
There is no better press release writing company as 123 term papers.