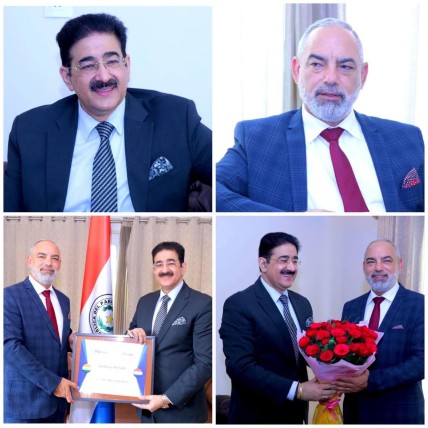 
New Delhi: H.E. Fleming Raul Duarte Ramos, Ambassador of Paraguay to India has been honoured with Patron ship of newly formed Indo Paraguay Film and Cultural Forum where Sandeep Marwah of Marwah Studios has been nominated as the Chair for the association.

An eminent alumnus of the Harvard Kennedy School, a brilliant planner and an accomplished diplomat, H.E. Fleming Raul Duarte Ramos has a unique combination of profound knowledge, wide-ranging expertise and outstanding administrative experience.

His comprehensive understanding of the geopolitical relationships and the vision for the future is commendable. His Excellency’s steady and diverse growth as an envoy, a thinker, planner and administrator reflect in his skills and dynamism which helped him to establish many landmarks in his life. Of special mention is his contribution as a President and CEO of the National Petroleum Corporation, as a Director of Central Bank and as a Country Manager in Development International and Multilateral Organisation. He was instrumental and played a key role in the creation of the first Country Development Bank in Paraguay.

His Excellency is held in high esteem and respect for his qualities of leadership and exceptional skills, versatility and pragmatic action. An economist, he has for more than 25 years participated in the several negotiations on trade facilitation, designed finance programs for value chains, including budgeting, program planning, project management, staff training and development.