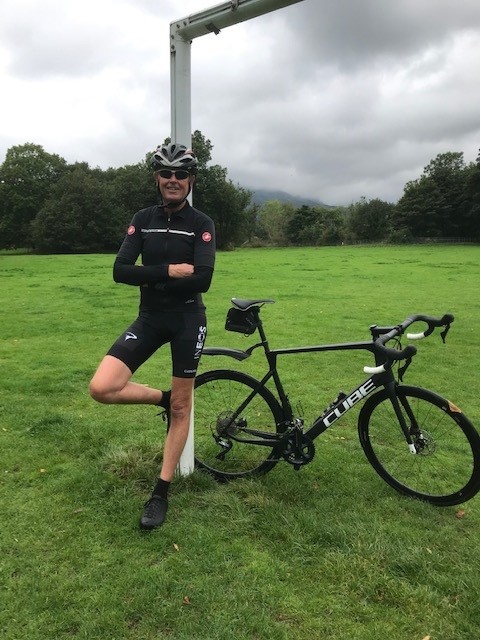 
Piranha Digital director Paul Airey has just completed the famous Fred Whitton Challenge raising more than £1,000 for charity in the process. On Sunday 19th September 2021, Paul completed the grueling 112-mile course in 8hours 55 minutes, finishing a respectable 467 out of the estimated 2,500 participants. The Fred Whitton Challenge consists of a 112-mile sportive around the Lake District, now a World Heritage Site. Starting at Grasmere, the challenge takes in a total of 10 of the hardest Lakeland climbs including Kirkstone, Honister, Newlands, Whinlatter, Hardknott, Wrynose and Blea Tarn passes.
The Fred Whitton Challenge is one of the most popular cycling sportives in the UK and is also famed as being extremely difficult and often extreme. Dubbed ‘The Daddy of them all’ by Cycling Weekly, cyclists rank the Fred Whitton alongside iconic European cycling events such as the Marmotte in terms of difficulty.
The Saddleback Fred Whitton Challenge is a charity event in honour of the late Fred Whitton who was a great advocate for cycle sport in Cumbria and North Lancashire. It is with respect to Fred and his ideals that the event remains just that, ‘a challenge’.
The very top riders complete the route in just under six hours but eleven hours and over are not uncommon for the average sportive rider. This is a very tough route and the hardest one-day ride in the UK. The event takes in all of the Lakeland passes, including Hardknott Pass, which with a 30% gradient, comes at 98 miles along the route, when the legs are already feeling the strain of the previous 7 climbs and 10,000 feet of ascent!
Paul has so far raised £1,090 for research into Dyskeratosis congenita (DC) which is a rare condition classified under a broad spectrum of genetic disorders known as telomere diseases. These diseases can often cause bone marrow failure and lung disease. People with DC frequently develop unusual skin pigmentation patterns, nail discoloration, white patches in the mouth (oral leukoplakia) and are especially susceptible to conditions that impair bone marrow function. Paul chose this charity following the diagnosis of the condition in a close school friend of one of his daughters. In addition, Paul’s participation contributed to the Fred Whitton chosen charities and in recent years the event has given MacMillan Nurses an average of just over £100,000 each year. Along with this, the event has shared the donation of £608,000 to the two Air Ambulances in Cumbria, The Mountain Rescue and various youth cycling projects.
As well as a keen cyclist, Paul is also a founding direct of Piranha Digital, a digital marketing agency in Preston established more than 20 years ago. Commenting on his ride Paul said “it was a great day out supported by thousands of fantastic people, I carefully stuck to my 3 month training plan provided by the organisers which was a great help in getting over all the mountain passes on the route “

Ged Online
To ensure stability and reachability of your applications at all times, remote DDoS protection can keep your hosting services online