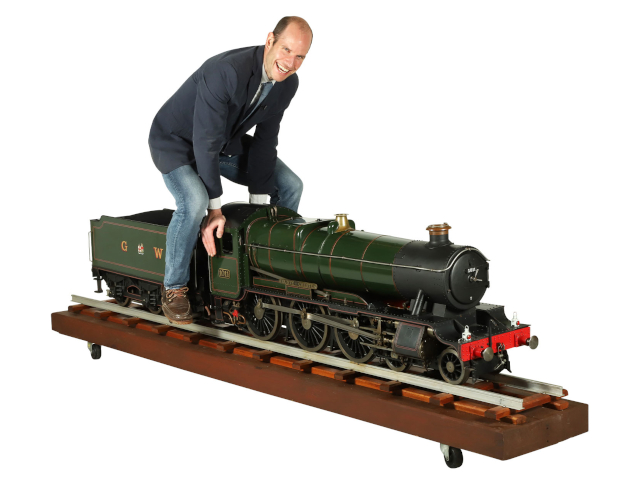 All prices quoted here are in Canadian dollars and include an 18 percent buyer’s premium.

The Saturday, September 11th event was a Toys & Nostalgia sale, featuring the Bryan Beatty collection of toys and communication-related memorabilia, including a well-rounded offering of cast iron and tin litho toys from the Victorian to the Atomic era. Mr. Beatty’s collection also included many radios, microphones and typewriters, with examples spanning the 20th century.

The Sunday, September 12th sale was an Advertising & Historic Objects auction, featuring the Scott Vanner breweriana collection. The finely engineered 7 ¼ inch gauge steam locomotive was the expected Day 2 headliner and was the auction’s top lot. It was rebuilt and reboilered by F. West and Lee Green and came with a brazed superheated copper boiler with fittings and gauges.

“Who says specialized collector auctions are the only way to drive top results?” inquired Ben Lennox of Miller & Miller Auctions, Ltd. “Our auctions have showed that great results can be achieved in a highly diverse sale anchored around two solid collections and many different collecting categories. We pride ourselves in bringing objects of merit to the collecting world.”

Lennox concluded, “We’re thrilled that people are taking notice, and that so many collecting categories are hot. While advertising signs continue to achieve record results month after month, it’s exciting to see strong results across the board. We’re still unable to host in-person sales, but our Miller & Miller bidding platform, plus LiveAuctioneers.com, attracts bidders far and wide.”

A Miller High Life Beer two-sided porcelain hanging sign, made in America in the 1930s and originally designed to accommodate bands of neon surrounding the perimeter, 35 ½ inches by 46 inches, found a new owner for $7,670. Also, a Worth and Martin (Toronto) one-cent bull’s head perfume dispenser (“Take the bull by the horns!”), made in 1902, solid brass with a glass mirror and able to accept large Canadian cents, 12 inches tall, with the original cashbox, made $5,900.