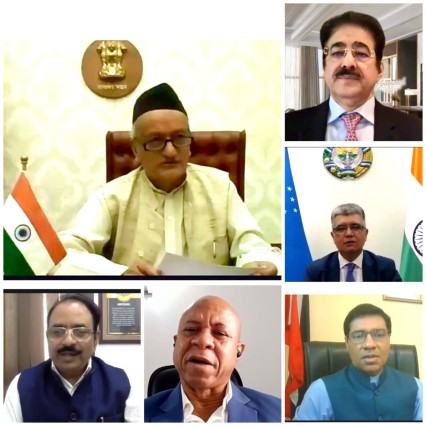 
New Delhi: “The Literary festival is directly connected to culture of the country it has become more auspicious when being inaugurated on the special occasion of Hindi Diwas. I extend my heartiest congratulations to the organisers Asian Academy of Arts for their valuable addition,” said H.E. Bhagat Singh Koshyari Governor of Maharashtra while inaugurating the 7th Global Literary Festival Noida 2021 online.

“It is interesting to be global but do not forget the mother land and mother tung. You can always express better and powerfully in the language you have been brought up with. We have to admire our country where we have love and respect for large number of our own languages. We must all learn to respect the art and culture of other countries to bring in cordial relations,” added Bhagat Singh Koshyari.

Present on the occasion H.E. Dilshod Akhatov Ambassador of Uzbekistan expressed the strong relationship between India and Uzbekistan. He also invited the delegates to the forth coming Tashkent International Festival.

To ensure stability and reachability of your applications at all times, remote DDoS protection can keep your hosting services online
There is no better press release writing company as 123 term papers.
Ged Online
Hire an expert to write a paper for you at writers per hour.
Go to Assignmentgeek.com and get your homework done.